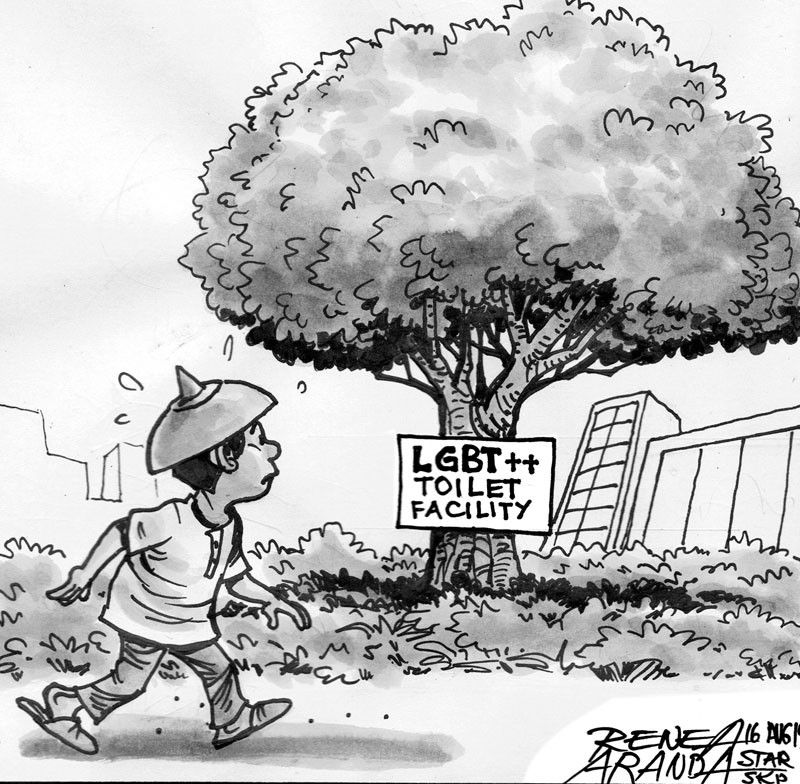 Using the restroom is one of the most intimate human activities. Women in particular want utmost privacy, with separate cubicles per toilet, unlike in the typical men’s restroom.

For all the openness of Filipinos to the LGBT+ community, there are people – men and women alike – who feel uncomfortable sharing restrooms with those outside their natural-born gender. A common female concern is that a man may just be pretending to be gay to invade women’s privacy or, worse, molest girls.

The LGBT+ community may find such fears unfair and baseless, but the fears and biases aren’t going to vanish overnight. A janitress at the Farmers Plaza shopping mall in Quezon City cited complaints from women in explaining why she barred a transgender woman from using the public restroom last Tuesday. An altercation ensued, and the transgender ended up being apprehended and handcuffed by police, subjected to a medical examination and then booked for unjust vexation. The charges were subsequently dropped and the janitress apologized, but the transgender reportedly intends to press charges against the mall operator.

Who was at fault? The city police has been accused of discriminating against the LGBT+ community. The city government has called out Farmers Plaza for failure to comply with a local ordinance requiring all establishments to provide gender-neutral or “all-gender”  public restrooms, either in lieu of or in addition to regular gender-exclusive facilities. The gender-neutral restrooms provide privacy, regardless of the user’s gender inclination.

Quezon City Ordinance No. 2357 in fact deserves replication nationwide, with full enforcement. Around the country, operators of some shopping malls, restaurants, fastfood chains and coffee shops have already taken it upon themselves to install such restrooms, even in the absence of local ordinances.

If other local government units pass similar ordinances, the next challenge is proper enforcement. The Quezon City ordinance was approved back in 2014, but the management of one of the biggest and oldest shopping centers in the city is either unaware of the ordinance or has ignored it. If clarity is needed, the city government is open for questions from the public. The unfortunate incident at Farmers Plaza need not be repeated.

'Crime of the year'