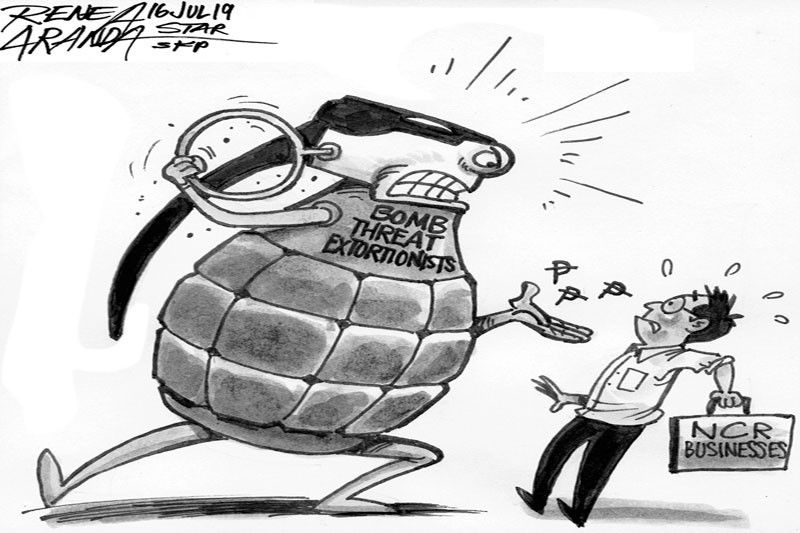 All that troublemakers need to do is stage one attack, to show what they’re capable of, and their scare factor becomes magnified. Following a grenade explosion in a Korean diner last week, four restaurants in Quezon City reportedly received phone calls at different times on Friday, threatening similar attacks unless the management paid a certain amount, with P50,000 mentioned in two cases.

The four cases were reported to the Philippine National Police. Did other establishments receive similar calls, but the owners were too worried to report the threats? Did these establishments give in to the extortion? Some individuals might pay up, if they fear that the threat is real and the state is powerless to protect them.

People usually yield to extortion if perpetrators in similar cases are not arrested and the crimes remain unsolved. This happened at the height of the kidnapping spree in Metro Manila about two decades ago. After a spate of ransom kidnapping cases, all that the thugs had to do was make a phone call and threaten to kidnap the target’s child, spouse or other loved one.

Protest rallies were staged, demanding an end to the crime spree. Ransom kidnapping became one of the most lucrative industries in the country – until the PNP launched a brutal crackdown, implementing what the public suspected was an unwritten policy of taking no prisoners.

As in any crime, the best deterrent to kidnapping at the time was the certainty of being caught. Ransom kidnappings have since abated. Now there appears to be a budding trend to engage in extortion using bomb threats. Thanks to the grenade blast that rocked the Korean diner, business establishments are taking bomb threats seriously.

Police can prevent this type of violent extortion from spreading by arresting those behind the explosion in the Korean restaurant. At the same time, the PNP and other law enforcement agencies must tighten measures to stop the proliferation of explosives and bomb-making materials. Why does it seem so easy for unauthorized persons to obtain a grenade in this country?

Fortunately, there were no casualties in the grenade explosion that hit the diner. Every effort must be made to prevent this problem from escalating.

EDITORIAL- Get the rest of them