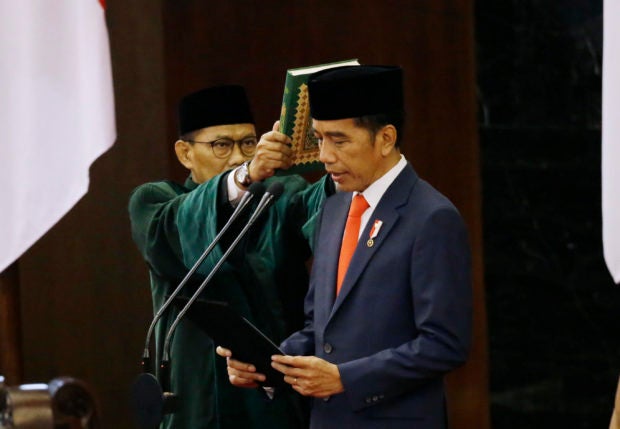 JAKARTA, Indonesia — Indonesian President Joko Widodo was sworn in Sunday for his second and final five-year term with pledges to champion democracy and take bolder actions against poverty and entrenched corruption in the world’s most populous Muslim-majority nation.

Known for his down-to-earth style, Widodo opted for an austere ceremony at the heavily guarded Parliament in contrast to the festive parade and horse-drawn carriage at his first inauguration, a relaxed affair where he was cheered on by thousands of waving supporters.

A knife attack by an Islamic militant couple against his security minister on Oct. 10 prompted a security crackdown for Widodo’s second inauguration. Army troops and police, along with armored vehicles, firetrucks and ambulances, were deployed across Jakarta and major roads were closed. On his way to the ceremony, Widodo left his convoy with some of his security escorts and shook the hands of supporters, who waved national flags, yelled his name and called him “bapak,” or father.

After taking his oath before the Quran, the Muslim holy book, in front of lawmakers and foreign dignitaries, Widodo laid out ambitious targets to help Indonesia join the ranks of the world’s developed nations by its centennial in 2045.

He said in his inauguration speech that he expects poverty — which afflicts close to 10 percent of Indonesia’s nearly 270 million people — to be just about wiped out and the country’s annual GDP to reach $7 trillion by then.

“For those who are not serious, I’ll be merciless. I would definitely fire people,” Widodo warned.

Australian Prime Minister Scott Morrison and Chinese Vice President Wang Qishan were among the dignitaries attending. President Donald Trump sent Secretary of Transportation Elaine Chao for the ceremony in Indonesia, Southeast Asia’s largest economy and a member of the G-20 bloc of nations.

Indonesia is a bastion of democracy in Southeast Asia, a diverse and economically bustling region of authoritarian regimes, police states and nascent democracies.

After decades of dictatorship under President Suharto, the country was convulsed by political, ethnic and religious unrest in the late 1990s and early 2000s. Since then, it has consolidated its democratic transition. While most of the country remains poor and inequality is rising, it is home to a rapidly expanding middle class.

Popularly known as Jokowi, Widodo is the son of a furniture maker who grew up with his family in a rented bamboo shack on the banks of a flood-prone river in Solo city on Java island. He is the first president from outside the country’s super rich and often corrupt, political, business and military elite.

Widodo, 58, presents himself as a man of the people, often emphasizing his humble roots. His popular appeal helped him win elections over the past 14 years for mayor of Solo, governor of Jakarta and twice for president. In a reflection of his popularity, he has nearly 26 million followers on Instagram and more than 12 million on Twitter.

He has been likened to Barack Obama, but since taking office he has been perceived as unwilling to press for accountability that threatens powerful institutions such as the military. Instead, he has emphasized nationalism while also fending off attacks that he is not devout enough as a Muslim.

Widodo was sworn in with his new vice president, Ma’ruf Amin, one of the most important religious figures in Indonesia. He chose Amin as his running mate to shore up his support among pious Muslims. Amin was chairman of Majelis Ulama Indonesia, the country’s council of Islamic leaders, and supreme leader of Nahdlatul Ulama, the world’s largest Muslim organization.

Widodo has been widely praised for his efforts to improve Indonesia’s inadequate infrastructure and reduce poverty. He inaugurated the nation’s first subway system, which was financed by Japan, in chronically congested Jakarta in March after years of delay under past leaders.

Pressing on is the biggest challenge, however, in his final years in office given the global economic slowdown, major trade conflicts, falling exports and other hurdles that impede funding.

In an interview with The Associated Press in July, Widodo said he would push ahead with sweeping and potentially unpopular economic reforms, including more business-friendly labor laws, because he’ll no longer be constrained by politics in his final term.

“Things that were impossible before, I will make a lot of decisions on that in the next five years,” he said then.