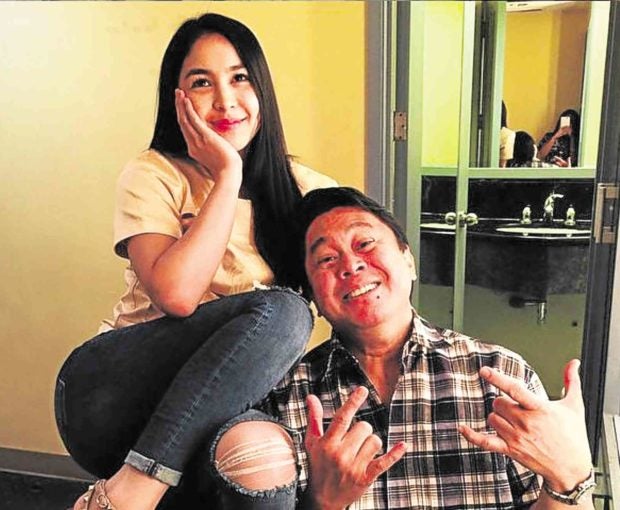 That was Dennis Padilla’s terse reminder for Gerald Anderson, who reportedly cheated on his ex-girlfriend, Bea Alonzo, with Julia Barretto—the comedian’s daughter with Marjorie Barretto.

At a recent press conference for his Sept. 4 comedy film, “Sanggano, Sanggago’t Sanggwapo,” he related that he got in touch with Gerald when the controversy involving the ABS-CBN stars blew up.

“I texted him, then he called me up … I reminded him of that fact. And I’m pretty sure that, as a man, he understands the weight of my words,” he said.

Dennis made no threats against Gerald, he stressed, adding that he believes in “diplomacy”: “If you can talk it out, then talk it out. I don’t think there’s anything a proper discussion wouldn’t resolve. You have to make sure everything is clear.”

Pressed for his thoughts on the prospect of Gerald dating Julia, the 57-year-old comedian said: “As long as my daughter doesn’t end up getting aggrieved.”

Even if Gerald has a “playboy image”?

“The important thing is my child’s well-being,” reiterated Dennis, who appeared to be in a bind during the interview: As much as he wanted to talk more about the issue, Dennis didn’t want to take the attention away from his film, which he coheadlines with Janno Gibbs and Andrew E.

“I was prepared to answer your questions, but I know that it will rob the focus off the film we’re trying to promote,” Dennis said. “In fact, I had already begged off from another media event prior to this one, because I knew this will be the topic. While I would like to talk more, I really can’t.”

He did relate, however, that he was hurting for Julia. “Even if we don’t get to talk or see each other every day, knowing that your child is going through something is hard for a father,” he said.

Since he still uses a “Jurassic” Nokia phone, Dennis hasn’t seen the kind of bashing Julia has been getting online. But he advised her to “stay out of social media” until the issue “dies down.”

“She’s doing OK; she doesn’t seem sad. She’s busy preparing for the Star Magic Ball and their sportsfest. I told her not to check social media and free up her schedule so she could go on vacation. And I believe she took my advice,” he said.