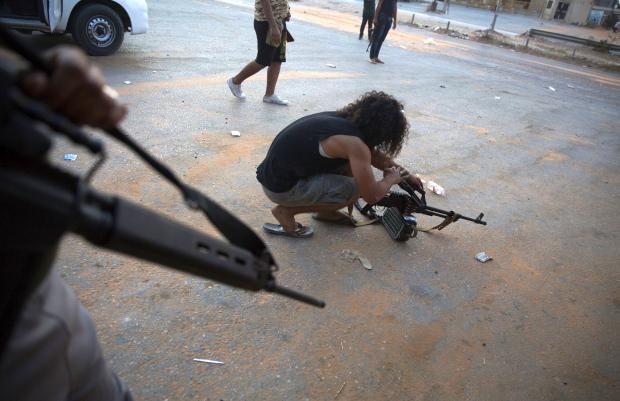 CAIRO — Recent clashes between rival Libyan militias for control of the capital Tripoli have displaced nearly 20,000 people, the U.N. said Tuesday and prompted the prosecutor of the International Criminal Court to warn that she could investigate and possibly prosecute new offenses.

The self-styled Libyan National Army, aligned with a rival government in the east, launched a major military offensive on April 5 to take Tripoli, igniting clashes with rival militias allied with the U.N.-supported government.

ICC Prosecutor Fatou Bensouda, who was already investigating crimes in Libya, said in a statement that she is “deeply concerned” about the escalation of violence and called on military commanders to prevent war crimes.

She said she “will not hesitate to expand my investigations and potential prosecutions to cover any new instances of crimes falling within the Court’s jurisdiction.”

U.N. spokesman Stephane Dujarric in New York said Tuesday the number of people displaced due to hostilities in the Tripoli area has increased to near 20,000, including more than 2,500 in the last 24 hours, according to the U.N. migration agency.

He said 50 civilian casualties were confirmed so far, including 14 deaths, but these individually verified cases must be considered “a minimum,” Dujarric said.

Dujarric said heavy weapons and shelling have damaged houses, schools, and civilian infrastructure. He said the number of people displaced due to hostilities in the Tripoli area has increased to nearly 20,000, including more than 2,500 in the last 24 hours.

Dujarric said Monday that around 3,000 migrants remain trapped in detention centers in, and close to, conflict areas. And “in some cases guards have abandoned the detention centers leaving detainees to their own devices without basic life-sustaining supplies such as food or water,” he said.

It said clashes were taking place on the road that links the city to the Tripoli international airport. The LNA said earlier this month that they captured the airport but rival militias said they reclaimed the facility. The airport has not been functional since fighting in 2014 destroyed much of the facility.

The battle for Tripoli could ignite a civil war on the scale of the 2011 uprising that toppled and killed longtime dictator Moammar Gadhafi. That conflict led to Bensouda’s ongoing probe after the U.N. Security Council called for an investigation.

Since Gadhafi’s ouster, Libya has been governed by rival authorities in the east and in Tripoli, in the west, each backed by various militias and armed groups fighting over resources and territory.