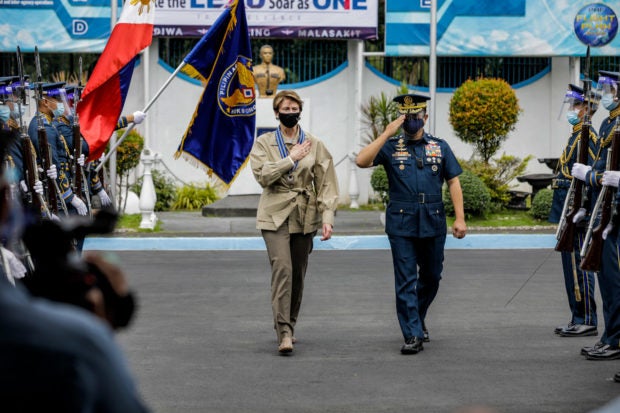 MANILA, Philippines—The US Secretary of the Air Force met with Philippine defense and military officials on Wednesday (Nov. 25) in a bid by the US government to boost military partnership between Washington and Manila.

Barbara Barrett, who oversees the US Air Force’s annual $250 billion budget and 685,000 personnel, met with Philippine Defense Undersecretary Cardoza Luna, Armed Forces of the Philippines chief Gen. Gilbert Gapay and Philippine Air Force chief Lt. Gen. Allen Paredes, according to a statement from the US Embassy.

The embassy statement said Barrett underscored the importance of US-Philippine alliance to national and regional security. She also discussed with the Philippine defense officials opportunities for greater bilateral security ties.

Barrett’s visit coincided with the turnover by US officials of eight drones and unmanned aerial systems, worth $14.7 million, to the Philippine Navy.

Her trip to the Philippines came after the visit of US National Security Adviser Robert O’Brien earlier this week. O’Brien, during his visit, announced the donation of $18 million worth of smart bombs to the Philippine military and additional disaster relief aid for typhoon survivors.

Barrett’s visit also came on the same day that Philippine Defense Secretary Delfin Lorenzana, at an online security forum, warned that conflict between the United States and China in the South China Sea was escalating and the Philippines could get caught in the crossfire should the conflict turn into a shooting war.