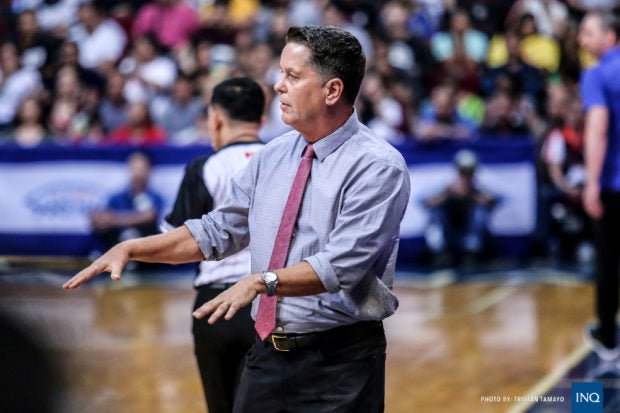 MANILA, Philippines—Coach Tim Cone said there are a lot of details needing to be threshed out with the Samahang Basketbol ng Pilipinas’ offer to coach the Philippine team.

But he is certain that he is merely a band-aid solution within the program’s reboot.

“I understand fully that if I take the position it’s just a stop-gap position, it’s no commitment to the Gilas head coaching,” he told reporters shortly after steering Ginebra past Alaska on Sunday night in the PBA Governors’ Cup. “Monday is supposed to be the day we resolve this whole issue. Not tonight.”

“I don’t have any information except that Mr. Al Panlilio approached me and we did talk about it.”

The Grand Slam mentor and holder of the most PBA crowns said he “doesn’t know anything about the mechanics” of the federation’s pitch.

“I don’t even know even if they’re going to make a commitment to me,” he added. “Are they just gonna give me a team and I’m gonna coach it? Or I’m gonna be in the selection, or part of it? Or you know, we get our practice once a week, twice a week?”

Cone stressed he doesn’t have any problems with temporarily filling in the vacancy.

“I fully realize that its just a stop-gap measure at this point. I’m just filling in until they can find the guy they want. And I’m perfectly OK with that,” Cone said.

The decorated tactician also added that he also “got the blessing of San Miguel,” which he regards as “crucial” in making a resolution.

Asked about how close he is at arriving at a decision, Cone, instead, asked for patience.

“So the less I say, the better it is at this point. Let them make the announcement. We’ll just talk. I want to be a good boy,” he added.

Cone was offered the coaching seat after former Gilas mentor Tab Baldwin begged off from the job.

Cone previously served as national coach during the 1998 Asian Games in Bangkok, Thailand, where he guided the Philippine quintet to a third-place finish.