Thailand marijuana festival has visitors on a high 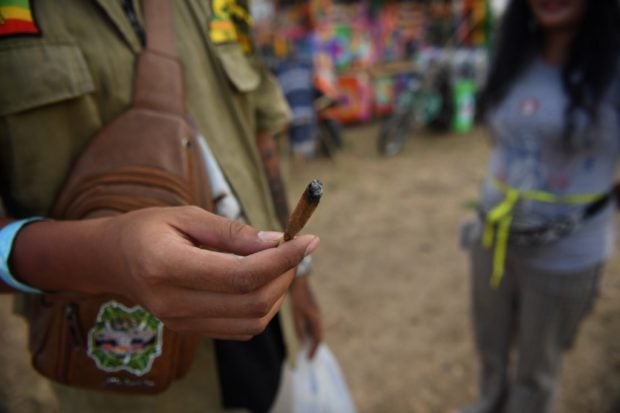 BURIRAM, Thailand – A Buddhist monk fishes out a vial of cannabis oil from his robe and puts a drop under his tongue – one of many people flocking to a weed festival in northeastern Thailand, where excitement is building over a medical marijuana boom.

Thailand became the first country in Southeast Asia to legalize marijuana for medical purposes last year, joining a growing list of governments including Canada, Australia, Israel and more than half the US states.

The global market is forecast to reach tens of billions in under a decade, but slow-moving implementation of the Thai law has lagged behind a wave of local enthusiasm.

A political party has endorsed the plant’s benefits while marijuana-themed conferences and panels have sprung up across Thailand, with the three-day festival in Buriram town being the latest showcase for the drug’s uses.

The “Pan Buriram” (Buriram Strain) festival, ending Sunday, is a first for the sleepy town located about five hours northeast of Bangkok and known mainly for its football and motorsports competitions.

Monk Chaivisit Visitvekin, 67, was one of thousands who showed up and stood in line to file documents with the Ministry of Health as part of an amnesty for those already using cannabis for pain relief.

He said he was taking it for shoulder pain among other ailments.

“I used it before and had no side effects,” he said.

Armed police lingered as Bob Marley songs pumped out over stereos, vendors sold rolling papers and pipes, and the pungent whiff of marijuana filled the outer fringes of the grounds.

Lecturers addressed attendees on everything from “the four cannabis varieties” to “quality control” in air-conditioned tents that displayed large marijuana plants.

Vendors also showed off fertilizers as well as lighting and greenhouse equipment for those seeking to grow the plant, while people milled around stands selling T-shirts with marijuana leaf designs and rode on horses around the grounds.

Recent graduate Surrerat Ruangnoy said she used marijuana to help treat migraines, adding that she hoped the traditional stigma surrounding the drug would ease as a result of such events.

“At the festival I saw old people and I took pictures and will show them to my parents,” the 26-year-old said. “Generally, Thai parents are conservative and they don’t understand.”

Buriram is the northeastern stronghold of the Bhumjaithai Party, which ran in last month’s election on a platform of legalizing marijuana and allowing households to grow six plants each.

The mega-wealthy Newin Chidchob, a founding member of Bhumjaithai who remains influential in the party and runs the town’s sporting empire, presided over the festival.

He told AFP Saturday that the purpose of the event is to help Thais “understand and get access to the benefits of cannabis”.

Bhumjaithai is seen as a key coalition partner in the next government after the March 24 vote in which both the junta-backed party and its main rival claimed victory.

Full election results are expected by May 9, but Bhumjaithai has said it will not join any government that does not support its policies.

Though Thai authorities plan to tightly regulate the marijuana sector for the first five years, Newin predicted the next government would speed up the process.

He also pointed to the longstanding use of marijuana in traditional medicine amid ongoing disputes over the plant’s actual health benefits.

The secretary general of The Union of Thai Traditional Medicine Society attended the festival and said he joined Bhumjaithai about a year ago because of its pro-marijuana stance.

“It (cannabis-infused medicine) has been used since Buddha’s era,” Sukasom Amratisha told AFP Saturday, standing by a table of sample recipes with plastic marijuana leaves as props.

Under the law 16 types of traditional formulas are allowed.

Some participants see the festival as part of a shift in conservative mindsets in Thailand.

“I’ve never thought I could be around so many (Thai) police and so much marijuana and not be in handcuffs.” /cbb