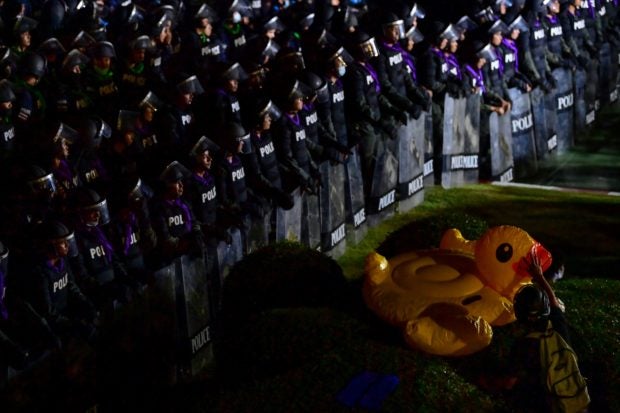 BANGKOK — Hundreds of protesters marched on a barracks of Thailand’s royal guards unit on Sunday hoisting inflatable rubber ducks high above their heads, a whimsical show of force by a pro-democracy movement calling for curbs to the power of the monarchy.

The yellow toy has been harnessed as a symbol by the protesters, whose leaders have emphasized peaceful tactics despite the recent use of water cannon and tear gas by security forces.

But their demands to reform the kingdom’s unassailable monarchy — once a taboo topic due to a draconian royal defamation law — have sent shockwaves through Thailand’s political and ruling class.

Sunday’s protest — the latest in a series of near-daily turnouts across Bangkok — was meant to target the 11th Infantry Regiment.

Along with the 1st Infantry Regiment, the two units were placed under King Maha Vajiralongkorn’s direct control last year — a move experts saw as a way for the monarch to assert more authority.

“These two regiments have been involved in cracking down on people in the past,” said prominent protest leader Parit “Penguin” Chiwarak.

“They have also played key roles in past coups.”

The black-clad protesters wore hair clips with yellow rubber ducks, while those on the frontlines donned gas masks and helmets — prepared for any potential skirmishes with authorities.

The entrances, gates, and walls of the barracks were covered with coils of barbed wire, while police in riot gear stood guard outside.

“The things used against us are bought using our taxes, so they are using our money to hurt us,” Farng, a 30-year-old graduate student, told AFP, declining to provide her full name.

“As taxpayers, the army should be serving us, not the monarchy,” she said. “Their duty should be to protect the people.”

The military has long positioned itself as a defender of Thailand’s enormously wealthy royal family, who boast assets conservatively estimated to be some $30-$60 billion.

In the name of protecting the king, the army has staged more than a dozen coups since the end of absolute monarchy in 1932.

Coup mastermind General Prayut Chan-O-Cha was head of a junta regime before renewing his lease on power in elections last year, which were governed under a military-scripted constitution.

Besides royal reform, the protesters are also demanding Prayut’s removal as premier and a rewrite of the constitution.

So far scores of protesters have been charged with sedition, while at least a dozen prominent leaders were summoned for questioning on royal defamation allegations.

Army Chief Narongphan Jittkaewtae has rejected coup rumors, saying the chance of another putsch was “less than zero”.