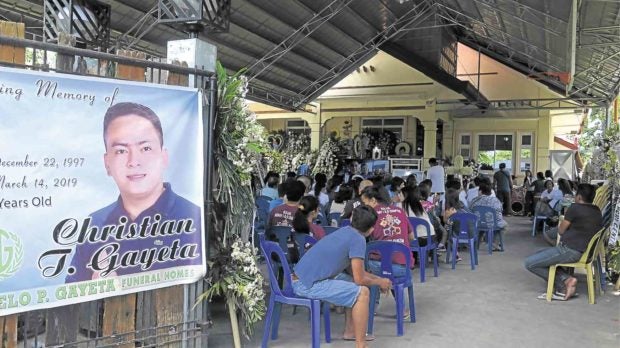 “The police will turn them over to me for the inquest,” Villanueva told the Inquirer over the phone Friday.

Senior Supt. Robert Arguelles, Quezon police director, confirmed the police custody of the suspects in a text message to the Inquirer.

The three policemen were among the principal suspects in the killing of Christian Gayeta and Christopher Manalo in an alleged shootout with policemen in Tayabas City on March 14 based on a police report.

But according to the NBI investigation, which was requested by the Gayeta family, the victims did not die in an encounter but were deliberately killed by the policemen.

Villanueva said they already have the testimonies of four policemen involved in the killing.

On Monday, Laygo and three other Tayabas policemen were relieved from their posts to allow an impartial investigation into the case. But Laygo failed to report to the provincial headquarters after his relief.

He said he wanted to see the suspects face to face.

“I just want to ask them. Why did you kill my son? He was a good boy and a good father to his only son,” Gayeta said. Christian was interred on Thursday.

Before the burial, Gayeta accused the police of allegedly hiding the killers of his son.

He demanded the resignation of Philippine National Police Chief Director General Oscar Albayalde and Carranza for their failure to bring justice to the victims./lzb