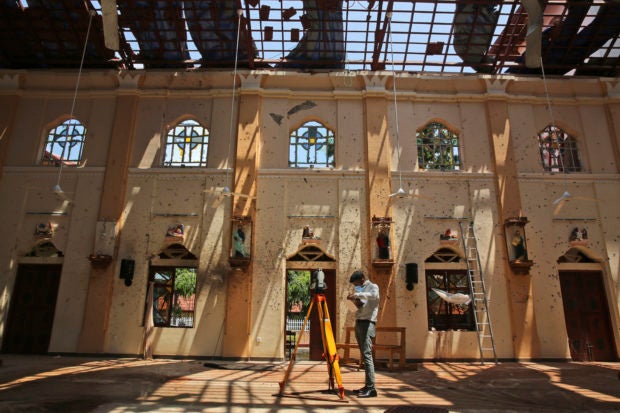 COLOMBO, Sri Lanka – Catholic churches in Sri Lanka canceled all Sunday Masses until further notice over concerns that they remain a top target of Islamic State-linked extremists, even as authorities said Friday a suspected local leader blew himself up in the Easter suicide bombings.

Cardinal Malcolm Ranjith told journalists that church officials had seen a leaked security document describing Catholic churches and other denominations as a major target for attackers. Ranjith, who is archbishop of Colombo, also asked the faithful to stay home for their own safety.

The cardinal’s comments come after the U.S. Embassy in Sri Lanka warned the public to stay away from places of worship over the weekend, a stark alert underlining that authorities believe that members of the group remain at large.

The group’s leader, Mohamed Zahran, killed himself in a suicide bombing at the Shangri-La hotel, one of six hotels and churches targeted in the attacks that killed at least 250 people on Sunday, police said Friday.

Police also said they had arrested the second-in-command of the group, called National Towheed Jamaat.

For the first time Friday, Catholic priests allowed journalists inside one of the bombed churches, St. Anthony’s Shrine in Colombo.

Shoes left behind by panicked worshippers remained in the darkened church.

Broken bottles of holy water lay on the floor, where flowers were strewn. Armed soldiers stood guard outside.

Gration Fernando crossed himself when he looked at the church after walking out of his shop nearby.

Fernando said he, like other Sri Lankans, is worried about further attacks.

Across Colombo, there was a visible increase of security as authorities warned of possible new attacks and pursued suspects who could have access to explosives.

Authorities told Muslims to pray at home rather than attend communal Friday prayers that are the most important religious service of the week. Several mosques held services despite the warning.

At one mosque in Colombo, police armed with Kalashnikov assault rifles stood guard outside.

Australia’s prime minister said Friday that it had been confirmed that the Sri Lanka attackers were supported by the Islamic State group, which has claimed responsibility for the massacre.

The group has distributed a video of Zahran and others pledging allegiance to the withered caliphate. /gsg