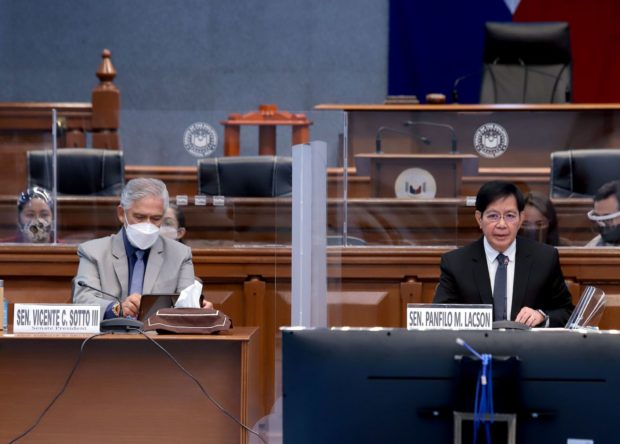 After a former lawmaker said the New People’s Army (NPA) prioritizes recruitment among activists, Sotto surmised that Parlade’s warning might be “correct.”

Ex-Bayan Muna Party-list Rep. Teddy Casiño told a Senate investigation into the alleged red-tagging activities of military officials on Tuesday that the NPA usually recruits among the “idealistic sectors of our society.”

Casiño, who was among individuals tagged as a member of the Communist Party of the Philippines (CPP), has denied such allegations.

“Their first priority for recruitment would be precisely the activists. Kasi ito ‘yung tignin nila kayang magsakripisyo, can devote their full time to these kinds of activities. I mean, it would be strange [for] them to be recruiting from the business sector—although I think they are also doing that,” Casiño said.

(Their first priority for recruitment would be precisely the activists. Because these are the people who they think would be willing to make sacrifices, who can devote their fill time to these kinds of activities. I mean, it would be strange for them to be recruiting from the business sector—although I think they are also doing that.)

(If what you’re saying is accurate, then Gen. Parlade’s warning is correct? It has value. To be careful from joining such groups because they could become a target, you said that activists are being recruited.)

(Following your logic, Parlade’s wanring has value that the public, celebrities should be careful.)

Parlade, whose earlier pronouncements prompted the Senate investigation, received criticisms for warning actress Liza Soberano from engaging in women’s group Gabriela, which according to him, is a terrorist front.

Parlade heads the Armed Forces of the Philippines -Southern Luzon Command and serves as the spokesperson of the National Task Force to End Local Communist Armed Conflict, a government body created by the Duterte administration to end the more than five decades old insurgency in the country.

“I gave former Cong. Teddy Casiño a chance to answer the allegation vs Joma Sison and the legal fronts but instead he said [it’s] the recruitment ground of the CPP/NPA. Therefore, [it’s] correct to warn the youth in joining such groups,” Sotto said in a separate message to reporters after the hearing.

But while Casiño admitted that the NPA recruits among activists, he stressed that it does not follow that organizations, where recruited activists belong, are already a communist front.

(There’s no denying that there is recruitment. That does not mean that the organizations where the NPA is recruiting from will be tagged as a ‘front’ or ‘they are part of the armed struggle.’ That is a dangerous assumption to make.)

The Senate defense panel has so far conducted two hearings on the issue. Another hearing is set for Dec. 1.