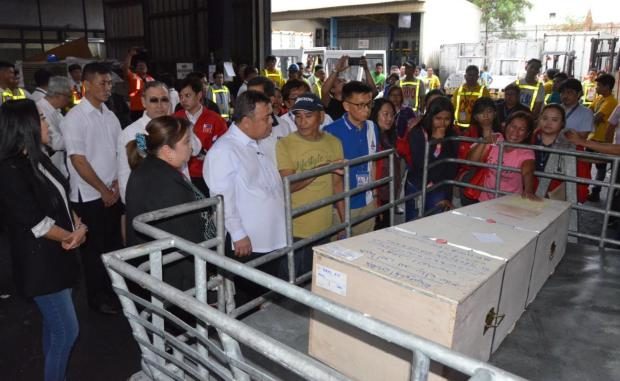 NORALA, SOUTH COTABATO, Philippines—Shocked and outraged relatives of Jeanelyn Villavende, the Filipino maid in Kuwait who was allegedly beaten to death by her employers, are demanding capital punishment for her killers.

“Those who killed her were worse than beasts,” her uncle Moises Villavende said after seeing her remains here on Thursday.

Foreign Secretary Teodoro Locsin Jr. said the government would provide legal and other assistance to the family to seek the death penalty for Villavende’s Kuwaiti employers and had hired a “top-notch” criminal lawyer in Kuwait for her case.

“She was just five months in their employ and her torture began, relieved only by the few seconds she was given for phone calls to her family whose typhoon-destroyed dwelling she wanted to rebuild. Then no more calls,” Locsin said on Twitter after meeting Villavende’s family on Wednesday.“For what they did to her the death penalty is a mercy … There will be blood,” he vowed, adding that the government would also pursue Villavende’s recruiter.

Villavende, 26, left the country in July last year to work for a Kuwaiti couple in the Gulf nation. She got the job through a recruitment agency in Sultan Kudarat province.

She wanted to build the family a better house and to redeem her family’s three-fourth-hectare farm that was mortgaged for an amount that had risen to P350,000, said her stepmother Nelly Padernal, who calls her by her nickname Tata.Overseas Workers Welfare Administration (Owwa) chief Hans Leo Cacdac said another reason Villavende worked abroad was to be able to save up for her younger sister’s education. He assured her family that they would receive her full Owwa benefits, including a scholarship for her sister.

The Department of Foreign Affairs has provided Villavende’s family P100,000 to help pay for her funeral.

Villavende’s body arrived in Manila in a white wooden casket on Wednesday and flown to General Santos City early Thursday. It was then driven to Emerald Funeral Parlor in her hometown of Norala where family members and other relatives waited.

The Kuwaiti embalming certificate stated that she died on Dec. 28 due to “acute failure of heart and respiration as a result of shock and multiple injuries in the vascular nervous system.”

Moises said her skull had been cracked and there was a large wound in the back of her head. There were bruises in different parts of her body, he added.

“I cannot stomach watching her body for long,” he said. “When she left last year, she was looking good and healthy. Now she looks skinny.”

Another uncle, Zosimo Panisales, said her body “showed that she was badly beaten.”

“Those who killed her were not human,” he said.

Villavende’s stepmother, who is also her aunt, wept as she emerged from the morgue. “Tata is so pitiful. She looks awful. She is very pitiful. She is very pitiful,” she said.Villavende’s father, Abelardo, earlier said he was seeking “an eye for an eye, a tooth for a tooth.”He had signed documents allowing the National Bureau of Investigation to conduct another autopsy on his daughter’s remains.

Also outraged by her killing, the Department of Labor and Employment (Dole) again suspended the deployment of maids to Kuwait.

Villavende’s death at the hands of her employers violated a 2018 labor agreement with Kuwait meant to protect domestic helpers against abuse, the Dole said.

The Philippines first banned deployment of workers to Kuwait in February 2018 after the body of missing domestic helper Joanna Demafelis was found in a freezer in her employers’ abandoned apartment in Kuwait.It lifted the ban in May 2018 after the signing of the labor agreement with Kuwait.

In May 2019, another Filipino maid in Kuwait, Ma. Constancia Dayag was raped and killed, prompting the Philippines to demand appropriate action from Kuwait.

Around 262,000 Filipinos work in Kuwait, 170,000 of them domestic workers. —WITH REPORTS FROM DONA Z. PAZZIBUGAN AND JEROME ANING