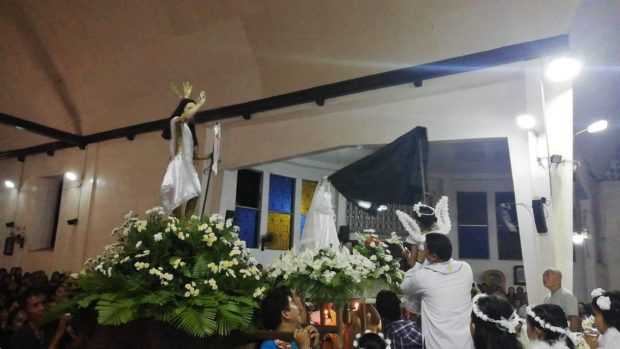 SIQUIJOR, Philippines – Children with angelic voices sang praises for the Risen Lord as Catholics on Sunday welcomed one of the most cherished of Filipino Easter traditions — the “Salubong.”

But at St. Francis de Assisi Parish in Siquijor town, Siquijor, it came early because they celebrated it on Saturday night.

Parishioners, many of them carrying lighted candles and bottled water, attended the Easter Vigil Mass at 8 p.m.

“Where is Jesus in every human activity?” he asked meaningfully.

He also challenged them to make Christ as the center of their lives.

After the Easter Vigil Mass, the Salubong followed at 10 p.m.

A choir sang Regina Coeli, the ancient Latin hymm to the Virgin Mary, as men marched out of the church in two groups behind two carriages bearing the images of the Christ and a veiled Mary.

As a girl dressed as an angel was hoisted up and took off the veil from Mary’s statue.

To many Catholics, the lifting of the veil is meant to symbolize the end of the Virgin Mary’s sorrows.

Originally called the “Encuentro,” it was to dramatize the meeting of the Risen Christ with the Virgin Mary to catechize or to teach the faith.

The congregation sang “Alive, Alive” to conclude the event. /cbb