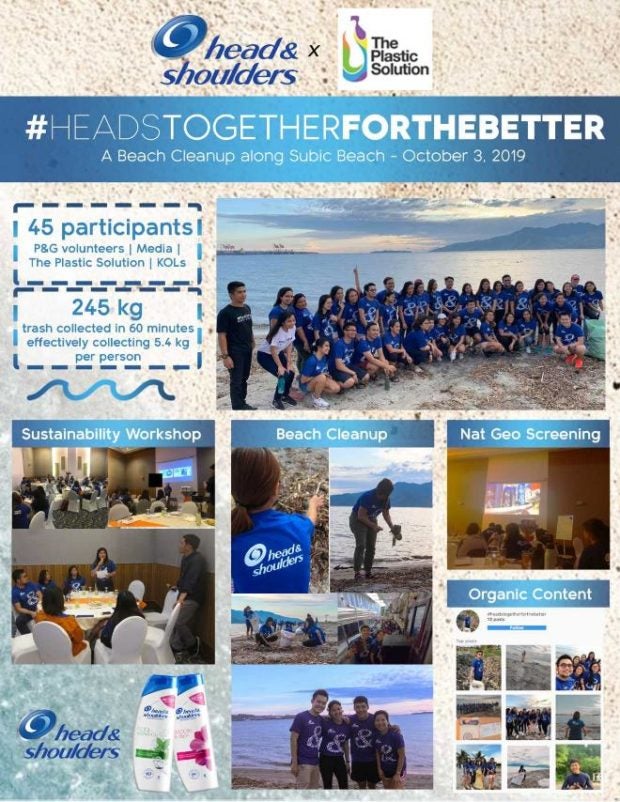 For more than 50 years, the use of plastic around the world has increased exponentially due to , which is expected to reach 8.6 billion in 2030. Because of the rapid population growth, it is now believed that there are more than found in the ocean, while 4 billion of microfiber plastics ended up as marine litter.

In a report published by , a United States-based non-profit organization, the Philippines is one of the five countries that contribute most to the world’s plastic waste.

The shocking truth about plastic crisis prompted , one of the world’s leading shampoo brands, and The Plastic Solution Philippines to spearhead a cleanup drive along the shores of Subic last October 3, 2019.

There were 45 people who participated in the activity including P&G volunteers, The Plastic Solution representatives, KOLs (Key Opinion Leaders), and members of the press. The cleanup drive highlighted the brand’s #HeadsTogether campaign, which aims to eliminate barriers between people and celebrate closeness in building relationships with others. It also celebrated the collective action to help reduce plastic pollution and raised awareness on recycling plastics.

Attendees who worked together to collect various kinds of beach waste across the shores of Subic, Zambales were able to put their #HeadsTogetherForTheBetter as they cleaned up 245 kg of trash in just 60 minutes.

The activity also featured , a series of environmental documentaries produced by that tackles the disturbing effects of plastic pollution in the country––especially those who are living in marginal areas.

“We really just wanted to raise consciousness [because] we had created footprints in the world and we wanted to work hard in making that change”, P&G Hair Care Category Manager Jan Jizelle Ang said.

Ang discussed the P&G’s Ambition 2030, a sustainable program that aims to create a positive impact on its main pillars, including the brand, the supply chain, the employees, and the society. It also highlights the importance of culture and society in terms of raising awareness on environmental issues.

P&G’s Ambition 2030 commits that “100% of its leadership brands will enable and inspire responsible consumption; for the packaging to be 100% recyclable or reusable; and for the society to benefit so that no P&G packaging will find its way to the ocean.”

With this, Heads & Shoulders’ goal is to maintain responsible brand consumption as they commit to producing the world’s first recyclable shampoo bottle made out of recycled beach plastics.

To know more about Head & Shoulders’ efforts on sustainability, click .