Rival rallies in Thailand as court U-turns on media shutdown 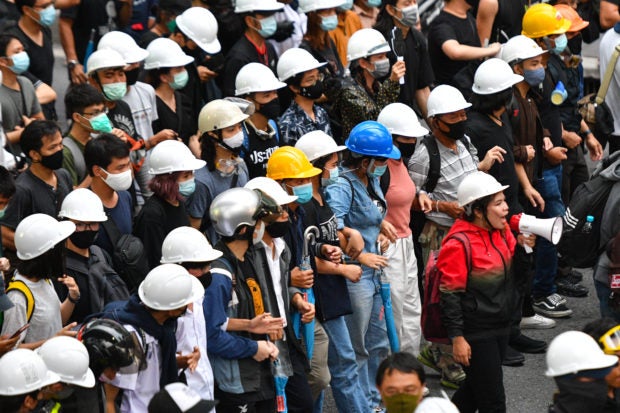 BANGKOK — Thousands of rival demonstrators gathered across protest-hit Thailand on Wednesday, after a court overturned a ruling to shut down media seen as critical of the government.

Democracy activists massed once again at Bangkok’s Victory Monument while counter-rallies attracted thousands of royalists in the southern province of Narathiwat and scores more in the capital.

AFP journalists on the ground in Bangkok said some minor scuffles broke out between rival factions before thousands of pro-democracy activists set off marching towards Government House.

Democracy protesters have massed daily in the capital since last week, flouting an emergency edict prohibiting gatherings of more than four people.

The youth-led movement is calling for Prime Minister Prayut Chan-O-Cha — who was due to address the nation again Wednesday evening — to step down.

The former army chief masterminded the 2014 coup and protesters say the military-drafted constitution rigged last year’s vote in his favor.

Activists are also demanding the powerful and ultra-wealthy monarchy to stay out of politics — a previously taboo subject.

The emergency decree was issued last week after a group of protesters surrounded the queen’s royal motorcade, raising their arms in a three-fingered salute of defiance, inspired by the “Hunger Games” movies.

On Friday the use of force escalated as riot police deployed water cannon against the unarmed activists and scores of demonstrators have been arrested.

The website was one of four media under investigation for violating computer crimes laws and an emergency decree aimed at curbing civil unrest.

But the court revoked the ruling and allowed all four media, including The Standard, The Reporters, and Prachathai, to continue reporting freely.

The court said there “must be specific content that is illegal and authorities cannot shut down a whole page or URL,” Voice TV’s lawyer Winyat Chartmontri told reporters.

“The court said people’s freedom (of) communication must be protected and media outlets can not be shut down. Press freedom is very crucial,” he said, adding that today’s decision cannot be appealed.

Voice TV staff would continue their reporting duties “fully, professionally and factually”, said a statement on the outlet’s website.

Their presence on the ground at protests “is considered by police as violating the emergency decree. They are not out of the woods yet,” he told AFP.

An activist, 26-year-old Nat, told AFP she was happy the court ruling about Voice TV had been overturned.

“We will still have a TV channel that reports the truth,” she said, urging for the freedom to protest to be returned too.