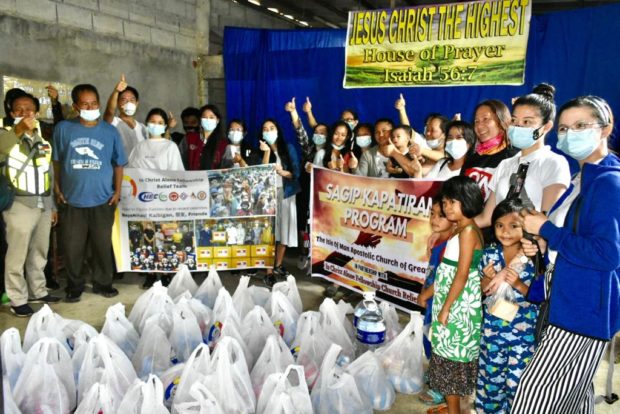 MANILA, Philippines — Religious groups and members of the Chinese-Filipino community on Saturday distributed relief packs to families in Rodriguez, Rizal, who were greatly affected by rains brought by Typhoon Ulysses.

Around 300 families from Rodriguez received aid, such as water, rice, biscuits and canned goods distributed by volunteers of the In Christ Alone Fellowship, Apostolic Riders of Christ, The Isle of Man Apostolic Church of Great Britain under Pastor Frederico Mateo and the Chinese-Filipino group BayaNihao.

The relief goods were distributed to five different churches in Rodriguez. These relief goods, in turn, will be given to affected families.

Pentecostal pastor Samuel Patagnan Jr. told INQUIRER.net that the onslaught of Ulysses was something that residents did not experience in previous years.

(Let’s just say some things that did not happen before, happened now.  The flood that happened here did not occur in previous years.)

(There are some areas here that were not flooded during Ondoy but were submerged during Ulysses.)

BayaNihao volunteer Austin Ong, meanwhile, said that his group has also been giving aid to residents in Batangas and Quezon province who were affected by Super Typhoon Rolly, as well as those greatly affected by the COVID-19 pandemic.