Polio cases still on the rise 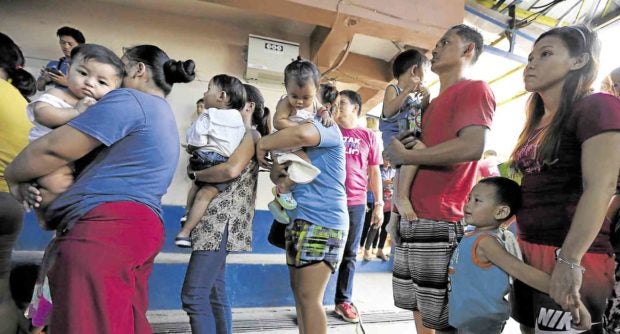 MANILA, Philippines — Despite several  supplemental vaccination programs mounted by the Department of Health (DOH) to contain the polio outbreak, the number of kids afflicted with the debilitating disease still continues to rise with a 17th case recorded on Saturday.

The latest polio case is a 1-year-old boy from Cabanatuan City, Nueva Ecija, who was brought to the hospital after suffering from fever and sudden onset of weakness on his left lower limb.

The boy is the 17th to be afflicted with polio since an outbreak of the disease was declared in September last year.

Since then, the DOH has mounted a number of supplemental vaccination programs to boost the communities’ protection against the disease.

Coverage is aimed at 95 percent.

The Research Institute of Tropical Medicine, on the other hand, also reported that environmental samples collected from the Butuanon River in Cebu have tested positive for the poliovirus.

To date, nine of the 17 cases are from the Bangsamoro Autonomous Region in Muslim Mindanao. Soccsksargen accounted for five cases, while the National Capital Region and Calabarzon each posted one case of the disease.

The latest case is the first registered incident in Central Luzon.

Due to these developments, the DOH said it was closely coordinating with the World Health Organization (WHO) for an appropriate vaccination response.

In the meantime, Health Secretary Francisco Duque III said they were assisting the cities of Cabanatuan and Mandaue in strengthening their acute flaccid paralysis surveillance capacities “to timely detect any acute onset of paralysis in children, especially within our communities.”

“We have evidence that the poliovirus continues to spread. Our aim is to promptly diagnose and treat all possible polio cases,” he said.

Starting on Monday, another round of polio vaccination will be held in all regions in Mindanao. In Metro Manila, the supplemental immunization will be conducted from Feb. 24 to March 8.

As this developed, the DOH has assured that even as bidding for the vaccine against pneumonia has stalled for three months now, the country had enough supply of it and was continuously being provided to the public.

Duque  maintained there was “ample” supply of the pneumococcal conjugate vaccine (PCV) even as they have held off on the procurement of additional stocks while awaiting the report of the Health Technology Assessment Council (HTAC) on which variant of the vaccine is more apt for the country.

HTAC was created under the landmark universal health care law to review in the next two years the existing health programs of both the DOH and the Philippine Health Insurance Corp.

In 2014, the Philippines shifted from PCV 10 to PCV 13 after the WHO found that the latter was “more cost-effective.” PCV 13 provides protection against 13 Streptococcus pneumoniae serotypes, which causes such diseases as pneumonia, meningitis and sepsis.

The difference between the two vaccines is that PCV13 gives more protection against other bacteria, such as serotype 19A.