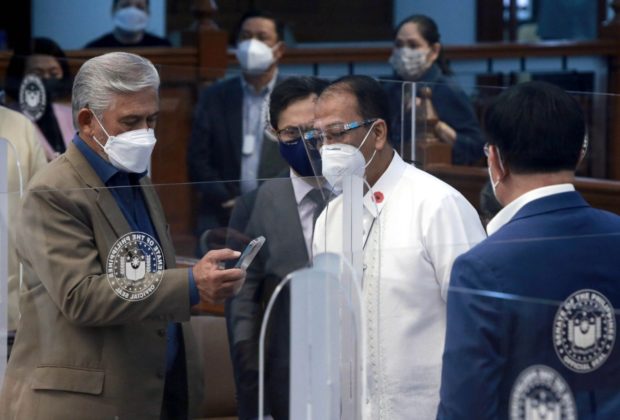 MANILA, Philippines — While assuring that the Philippines will not compromise its claim in the West Philippine Sea (WPS) in securing Covid-19 vaccines from China, vaccine czar Carlito Galvez Jr. said “differences should be set aside” in fighting the global pandemic.

“We will not compromise our stake…,” Galvez told senators during the Senate hearing into the government’s Covid-19 vaccination plan on Friday.

“And at the same time, we are looking at the global interest of really putting an end to this pandemic. This is a world menace…the differences that we have, maybe we have to set this aside so that we can rally, that’s my point, to rally behind saving humanity,” he added.

Before this, Senator Risa Hontiveros asked Galvez for assurance that the country’s national interest in the West Philippine Sea will not be compromised in the government’s procurement of vaccines from China.

Initially, Galvez told Hontiveros that differences in issues concerning the West Philippine Sea “should be set aside” amid the global pandemic.

“This is a global pandemic…nakikita po natin na talagang ang ano po natin ang problema natin ngayon is a global menace,  which is in order to control and contain the pandemic,” the vaccine czar said.

This, however, surprised Hontiveros.

(Even if all of the countries are exerting effort to help one another, I’m simply asking for reassurance that our national interest in the West Philippine Sea will not be compromised in the government’s effort to secure vaccines from China.)

In response, Galvez clarified and assured Hontiveros that “we will not compromise our stake.”

“The global interest…is really to save humanity, all countries rallied to support each other. That’s the context we are looking at,” he also said.

“We are adhering with the concept of equitable access, the safety, and efficacy of the vaccine,” he added.

Earlier, Galvez announced that the application of the Philippines to participate in the vaccine alliance has been approved.