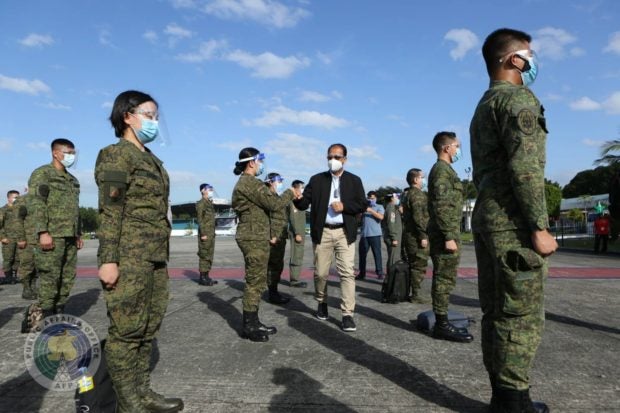 MANILA, Philippines—The Armed Forces of the Philippines (AFP) on Monday (Nov. 23) sent a 25-man medical contingent to Davao City, following a spike in COVID-19 cases there.

Maj. Gen. Benedict Arevalo, AFP deputy chief of staff for civil-military operations, and Secretary Carlito Galvez Jr. sent off the team in a ceremony at the Philippine Air Force’s Villamor Air Base in Pasay City. Galvez, a retired general, is chief implementer of the National Action Plan (NAP) against COVID-19.

Also in the ceremony was Melquiades Feliciano, deputy chief implementer of NAP in the Visayas.

The AFP said the medical contingent, which is composed of five teams of military doctors, nurses and medical aides, will augment efforts of the Inter-Agency Task Force for COVID-19.

The contingent is led by Maj. Sheryl Balmeo, of the Philippine Army Medical Corps. The AFP said all members of the team had been subjected to tests for SARS Cov2, the virus that causes COVID-19, and had been vaccinated for flu prior to their departure. Flu is one of the severe symptoms of COVID-19.

According to the Department of Health, 70 percent of total coronavirus infections in the entire Davao region is in Davao City. A report from the Octa Research Group, a team of experts, showed the hospital occupancy rate in the city had gone up to 84 percent.