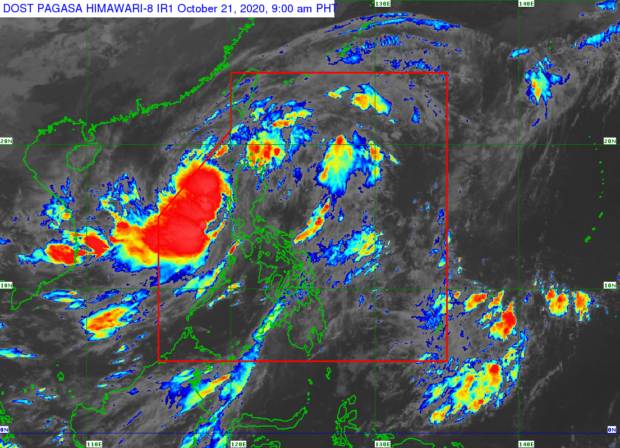 MANILA, Philippines — Tropical storm Pepito is now over the West Philippine Sea as Tropical Cyclone Wind Signal (TCWS) No. 2 is raised in La Union, the northern portion of Zambales, and the western portion of Pangasinan, the state weather bureau said Wednesday morning.

The center of Pepito was last spotted 115 kilometers northwest of Dagupan City, Pangasinan or 120 kilometers west-northwest of Baguio City, according to the severe weather bulletin issued by the Philippine Atmospheric, Geophysical and Astronomical Services Administration (Pagasa) at 8 a.m.

Pepito is moving west-northwestward at 30 kilometers per hour and has maximum sustained winds of 75 kph near the center and gustiness of up to 90 kph.

TCWS No. 2 is raised in the following areas, where winds greater than 61 kph and up to 120 kph may be expected in at least 24 hours:

Pagasa said Pepito is forecast to move generally westward over the West Philippine Sea this Wednesday before slowing down and turning northwestward on Thursday.

The weather disturbance is expected to exit the Philippine area of responsibility on Thursday morning or afternoon and will accelerate and turn westward starting Friday towards the central portion of Vietnam.

“Pepito is forecast to gradually intensify over the West Philippine Sea and may reach severe tropical storm category by tomorrow afternoon or evening,” Pagasa said.

Light to moderate with at times heavy rains will be experienced over Metro Manila and the rest of Luzon. Pagasa warned that flooding and rain-induced landslides may occur during heavy or prolonged rainfall especially in areas that are highly or very highly susceptible to these hazards.

Meanwhile, the t outside the Philippine Area of Responsibility  was last spotted 1,900 km east northeast of extreme northern Luzon. It has maximum sustained winds of 55 kph near the center and gustiness of up to 70 kph.

“It is currently almost stationary. This disturbance remains unlikely to enter the PAR,” Pagasa said.