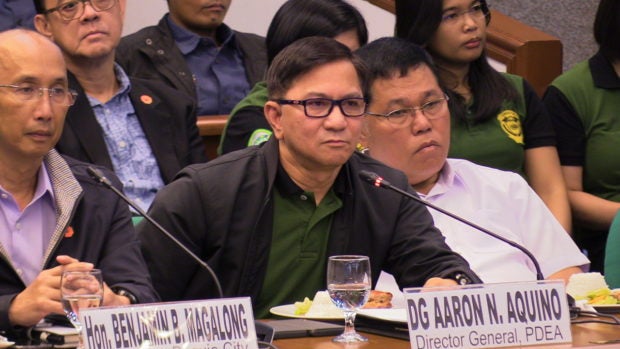 MANILA, Philippines – The Philippine Drug Enforcement Agency (PDEA) clarified that outgoing Director General Aaron Aquino did not step down from his post, as he was relieved for the purpose of assigning him to another office.

According to PDEA spokesperson Derrick Carreon, the impending movement of Aquino to another office was a  prerogative taken by President Rodrigo Duterte — who earlier appointed PDEA Region 10 director .

Aquino on Tuesday sent out an through Carreon, who then forwarded it to reporters.

“Outgoing DG Aquino did not step down po. He was relieved and shall be succeeded by incoming DG Wilkins Villanueva po,” Carreon said. “We all know that movement in key positions in government offices is the sole prerogative of the President.”

“In this case, outgoing DG Aquino will be assuming another position in the bureaucracy, but we are not at liberty to disclose further details po,” he added.

Asked why Aquino’s relief came at a time when the country was still dealing with the COVID-19 pandemic, Carreon said that he was not privy to the details.

Aquino was appointed by Duterte to the PDEA post last August 2017.  In his outgoing statement, the PDEA chief thanked the President and PDEA personnel who had worked with him since his appointment to the office.

Under his term, the government carried out that led to the confiscation of illegal drugs and the killing of high-value targets under the Duterte administration’s controversial drug war.

However, Aquino and his men would also be remembered for missing out on a , locally known as shabu, which was concealed in magnetic lifters, weighing around one ton.

The PDEA chief made headlines late last year when he shared his post as chair of the Inter-Agency Committee on Anti-Illegal Drugs (ICAD) with Vice President Leni Robredo, who was appointed to the post by Duterte.

Aquino and Robredo met several times, but they disagreed on several issues, including the of the Philippine National Police.