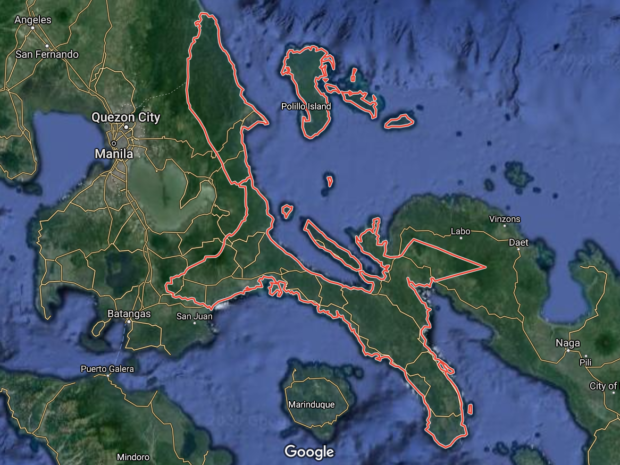 LUCENA CITY—Over 200 families, not just 25, in two towns in Quezon province were moved out of their homes at the height of flash floods near midnight on Wednesday (Jan. 20), authorities said.

The flooding, seen caused by watershed destruction by logging in the Sierra Madre mountain range, struck the towns of Infanta and General Nakar.

Ron Crisostomo, head of the Infanta disaster risk reduction management office, said at least 1,600 individuals from 222 families from five low-lying villages in the town had fled to a shelter when the flooding, unleashed by relentless rains and aggravated by runoff water from the overflowing Agos River, brought their communities under water.

The number of displaced people was 10 times more than the 25 families that had been initially reported by the provincial disaster management office.

Crisostomo, in a text message on Thursday (Jan. 21), said authorities also received information that several farm animals were carried away by the floods but no person was reported injured or missing.

He said some newly planted rice fields that had been destroyed by typhoon Ulysses in November last year were again damaged by the floodwaters.

Melchor Avenilla Jr., head of the Quezon provincial disaster risk reduction and management office, reported that at least 13 families composed of 74 individuals were also preemptively evacuated and given shelter at the village hall of Banglos in General Nakar.

The local governments of Infanta and General Nakar ordered the preemptive evacuation when the water of Agos River, which traverses the two towns, rose to a dangerous level.

The towns of Infanta and General Nakar were flooded with murky water that carried with it logs and other forest debris that cascaded from the Sierra Madre, where the river originates, and destroyed everything along its path.

Massive logging in the Sierra Madre mountain ranges was blamed for the tragedy.

Rat in washing machine in Roker

10 Local Destinations You Can Safely Travel To