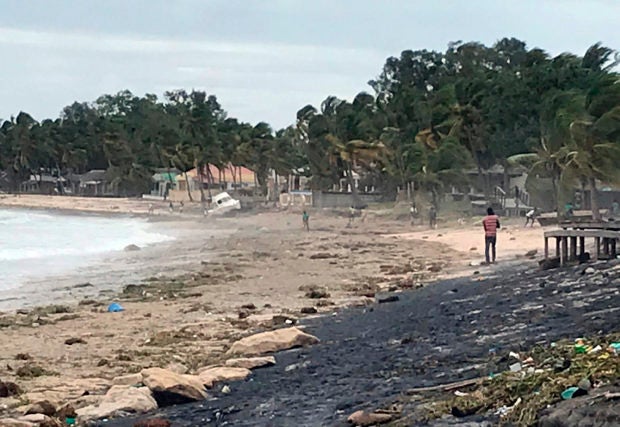 JOHANNESBURG – The second powerful cyclone to strike Mozambique in just six weeks ripped off roofs and killed at least three people on Friday as the United Nations warned of “massive flooding” ahead.

Over the next 10 days, the storm is expected to dump twice as much rain as Cyclone Idai did last month, World Food Program spokesman Herve Verhoosel said. Idai killed more than 600 people and displaced tens of thousands.

This is the first time in recorded history that the southern African nation has been hit by two cyclones in one season, the U.N. said.

Kenneth made landfall Thursday night in a part of Mozambique that hasn’t seen such a fierce storm in at least 60 years, forecasters said, renewing concerns about climate change and the country’s vulnerable, 2,400-kilometer (1,500-mile) Indian Ocean coastline.

Mozambique’s local emergency operations center said a falling tree killed a woman in the city of Pemba and a “high number” of houses in the Macomia district of Cabo Delgado province were destroyed.

Four ships sank off Palma town, with no reported deaths, the center said. On Ibo island, about 90% of houses in the main village were destroyed.

“Cyclone Kenneth may require a major new humanitarian operation” in one of the world’s poorest nations, even as post-Cyclone Idai relief operations are expected to continue for months, U.N. humanitarian chief Mark Lowcock said in a statement.

As with the earlier cyclone, thousands of people could be left exposed and hungry as flood waters rise in coming days.

Forecasters expected the remnants of the storm to bring heavy rain as it lingers over the region.

While the region that took the brunt of this cyclone is more sparsely populated than the area that took a hit from Idai last month, Mozambique’s disaster management agency has said nearly 700,000 people could be at risk.

The cyclone cut off electricity and toppled a tower that severed mobile phone communications for most of the island’s roughly 7,000 residents, Salzer said

“All my staff, they lost their houses so they sought shelter inside the hotel. There has been no aid from outside. I’m afraid of huge suffering for the population,” he said.

About 24 hours before the storm arrived, authorities issued warnings on Ibo island, but “of course, no one really knows what a cyclone is,” Salzer said. “It’s not a cyclone area.”

Early assessments from other areas were grim. Quissanga district reported “extensive damage” to houses, and communication links with Macomia and Muidumbe districts were down, the International Federation of Red Cross and Red Crescent Societies said in a statement.

The aid group cited weekend forecasts of as much as 250 millimeters (9 inches) of torrential rain, about a quarter of the average annual rainfall for the region. The districts of Macomia, Quissanga, Mocimboa da Praia and Mecufi were said to be most at risk. /gsg