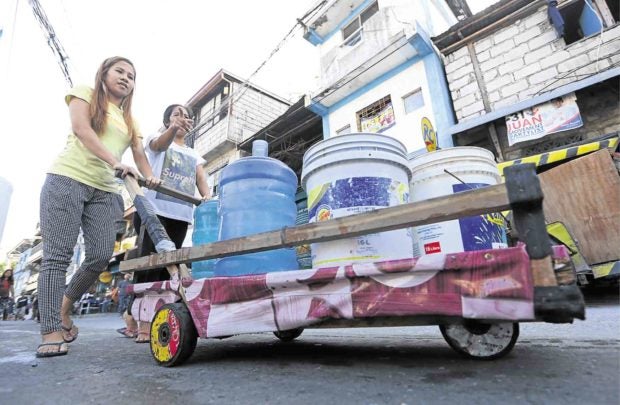 MANILA, Philippines — The Metropolitan Waterworks and Sewerage System (MWSS) on Saturday said it had called on Manila Water Co. Inc. and Maynilad Water Services Inc. to defer rate hikes they had planned to implement on Jan. 1.

The MWSS Regulatory Office (RO) said it was initiating talks with the concessionaires for a postponement “in light of recent developments,” in evident reference to President Duterte’s tirades this week against the two companies and the water concession agreements.

Citing onerous provisions of the deals, Malacañang threatened to challenge the decisions of the Permanent Court of Arbitration in Singapore, which directed the government to pay about P11 billion in indemnity to Manila Water and Maynilad.

Duterte said the government will not pay up and even threatened to rescind the contracts with the two companies and charge their owners with “economic sabotage.”

The MWSS had also said the concessionaires were passing on their corporate income tax obligations to their customers.
The Department of Justice said it was considering drawing up new concession agreements.

The two companies are claiming losses for the nonimplementation of rate hikes intended for the five-year rebate rebasing period that began during the administration of President Benigno Aquino III.

For the current five-year rate rebasing period, which will run until the end of 2022, MWSS has approved a hike of P5.73 per cubic meter in the basic charge of Maynilad and P6.22 to P6.50 per cubic meter for Manila Water.

The increases will be implemented in yearly tranches.

Starting Jan. 1, 2020, Maynilad is supposed to raise its basic charge per cubic meter by P1.95 and Manila Water by P2.

On top of this, the concessions allow quarterly water rate adjustments to account for fluctuations in the foreign currency exchange rate.

The two companies obtained foreign currency-denominated loans for their investments to operate in their concession areas.

“Manila Water, through a letter dated Dec. 3 addressed to the MWSS board, already expressed its intention to work out an arrangement on the implementation for the [rate] adjustment,” the MWSS RO said in a statement.

“Chief Regulator Patrick Ty will issue further statements once the matter has been resolved,” it said.

Last September, Ty explained that the rate adjustments for the current rate rebasing period did not include recovery of corporate income tax (CIT), “as some consumer groups insist.”

“The MWSS ruled in the previous rate-rebasing period that the CIT should not be included (to the charges to customers),” Ty said. “The concessionaires have challenged this in court, and it is still pending at the Supreme Court.”

Foreign Secretary Teodoro Locsin Jr., one of the most outspoken Cabinet members, backed the President’s stand.

In a series of tweets on Saturday, he denounced “native lawyers” and MWSS officials who prepared the concession agreements and cleared them for approval during the administrations of Presidents Fidel Ramos and Gloria Macapagal-Arroyo.

“I want the lawyers and officials and executives who perpetrated this sovereign surrender of sovereign function to regulate to be disbarred, prosecuted and left to rot in jail,” he said.

Locsin was referring to one provision in the deals that prohibits government interference in rate-setting, and another telling it to pay indemnity to the two water companies in case they incurred losses due to such interference.

Reacting to a comment to one of his tweets, the country’s top diplomat said no one disputed that costs were entailed in bringing water to the taps.

“But that doesn’t mean, given the exclusivity of the concessions to bring out the water, it wasn’t unconstitutional and unethical to oust government of its sovereign function to regulate it in the public interest. Jail the private and MWSS lawyers,” he said.

Locsin, a lawyer, however, offered a way out of the “water concession scandal.”

He said the two concessionaires should negotiate “constitutional agreements in place of the rotten ones.”

“Then they throw their crooked lawyers and MWSS officials in their pay under the bus and life goes on,” he added.

He disputed statements that officials of the Ramos and Arroyo administrations “perpetrated and perpetuated unconstitutional illegal concession agreements because they were afraid of multinational power.”

Only Aquino “stood up” to the concessionaires but by then “MWSS had locked in the toxic provisions surrendering the sovereign mandate to regulate business for the public safety,” he said.

“We need to straighten out what the FVR and GMA administrations made crooked,” Locsin added.