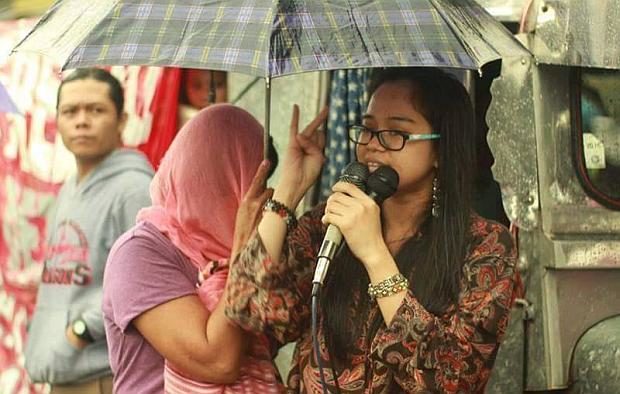 LUCENA CITY, Quezon, Philippines – The 23-year-old rights activist who was reported missing in Quezon province since Saturday by rights group Karapatan had been taken to a police station in General Luna town by Army soldiers.

Alexandrea Pacalda, who was last seen in Barangay Magsaysay in General Luna, according to a statement missing by Karapatan-Quezon chapter.

“I’m clearing if she surrendered or was caught in pursuit operations,” Cana said in reply to a request for comment by the Inquirer.

It was not clear whether she was suspected of being a member of the communist New People’s Army.

Capt. Jun Balilo, chief of the General Luna Municipal Police Station, confirmed that the activist was at the police station.

“But she is still not yet under the police custody. The Army has yet to formally turn her over to us. I don’t know about the circumstances of her situation,” Balilo told the Inquirer in a phone interview.

In a statement issued earlier on Sunday, the Quezon chapter of Karapatan said: “Unverified information suggests that she [Pacalda] was brought to a military camp in Barangay San Miguel Dao, Lopez, Quezon.”

According to Karapatan, Pacalda was managing editor of The Luzonian, the official student publication of Manuel S. Enverga University in Lucena.

She Pacalda was also an active member of the College Editors Guild of the Philippines and Gabriela-Youth.