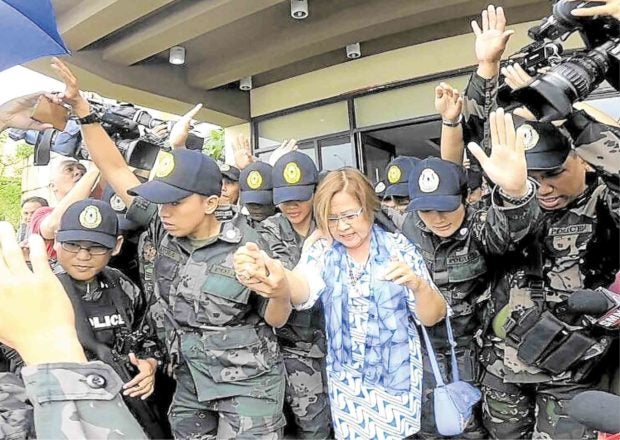 Vice President Leni Robredo on Tuesday said the continued detention of Sen. Leila de Lima was “one of the biggest setbacks” in human rights and justice in the country and appealed anew for the release of the feisty opposition senator.

De Lima, a staunch critic of President Duterte, will mark her 1,000th day of detention on Wednesday. She was arrested on Feb. 24, 2017, on charges of involvement in drug trafficking at New Bilibid Prison when she was justice secretary.

In a video message, Robredo said the allegations against the senator were baseless and rested on false testimonies and politicking.

“Our position is clear: The continued detention of Senator Leila is one of the biggest setbacks in human rights and judicial system in our country,” she said. “A thousand days had passed, but our call will only grow louder until it is heard by those who play deaf: to junk the false charges against Senator Leila and set her free immediately.”

Robredo said the time that De Lima had spent in detention could have been used to serve the citizens who elected her to office and spent in the company of her family and loved ones.

Since the senator’s arrest over two years ago, Robredo has repeatedly called for De Lima’s release.

Both women ran under the opposition Liberal Party in 2016, and both were critical of the Duterte administration’s bloody war on drugs and alleged human rights violations.

Robredo said she looked up to De Lima’s courage and perseverance amid what she called outright violation of the senator’s rights and efforts to destroy her credibility.

“Even behind bars, she continues to do her duties as a legislator and expresses her opinions and positions on important issues in our country,” she said.

“In these times when there seems to be many threats to our freedom and democracy, Senator Leila serves as an inspiration to continue fighting for the good,” Robredo said, adding: “We pray that she does not fight this alone.”

Human rights groups and critics of the administration see De Lima’s arrest as a retaliation for her vocal opposition to Mr. Duterte.

When she was Commission on Human Rights chair, De Lima led the investigation of the Davao death squad killings when Mr. Duterte was mayor of Davao City—a probe that she reopened after she was elected senator in 2016, in addition to the investigation of alleged extrajudicial killings in the administration’s antinarcotics campaign.