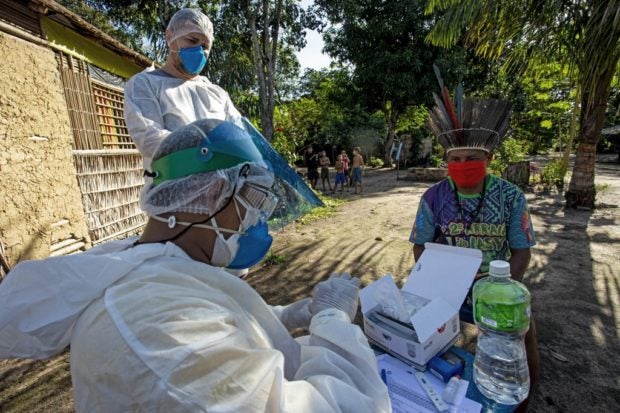 GENEVA — Latin America and the Caribbean surpassed five million coronavirus cases on Monday as the World Health Organization warned there might never be a “silver bullet” for the pandemic.

Only the United States, with 4.7 million cases and more than 155,000 deaths, has been worse affected.

In the region’s second hardest-hit country, Peru, daily cases have almost doubled from 3,300 to 6,300 since bus and air travel resumed a month ago, according to official figures.

The world’s hope of ending the current cycle of outbreaks and lockdowns rests on a vaccine, but the WHO said governments and citizens should focus on what is known to work: testing, contact tracing, maintaining physical distance and wearing a mask.

“We all hope to have a number of effective vaccines that can help prevent people from infection,” WHO chief Tedros Adhanom Ghebreyesus told a virtual press conference.

“However, there’s no silver bullet at the moment — and there might never be,” he said.

“For now, stopping outbreaks comes down to the basics of public health and disease control. Do it all.”

Despite months of economically crippling restrictions, the pandemic is gathering pace with the worldwide death toll nearing 700,000 and a White House adviser warning the virus is “extraordinarily widespread” in the United States.

There has been a resurgence in countries that had previously brought their outbreaks under control, including Australia, where sweeping new restrictions kicked in for the hard-hit state of Victoria on Monday.

They include a nighttime curfew in state capital Melbourne for the next six weeks, with the city ordering non-essential businesses to close, and a ban on weddings.

“People are pretty demoralized,” he told AFP. “Pretty well everything is closed around here. So it’s a very strange, quite eerie atmosphere.”

Authorities in the Philippines have also had to reimpose curbs after infections surged past 100,000, forcing more than 27 million people — including in the capital Manila — back into lockdown for two weeks from Tuesday.

The Middle East’s hardest-hit nation Iran meanwhile reported its highest single-day infection count in nearly a month, warning that most of its provinces are facing a resurgence.

In the US, Deborah Birx, head of the White House coronavirus task force, warned the country has entered a “new phase.”

“What we are seeing today is different from March and April,” she told CNN, adding that the virus “is extraordinarily widespread.”

The pandemic has spurred a rush for a vaccine that some have compared to the space race, and Russia said on Monday it is aiming to launch mass production in September and turn out “several million” doses per month by next year.

But Vitaly Zverev, laboratory chief at the Mechnikov Research Institute of Vaccines and Sera, told AFP that it was “impossible to ensure a vaccine’s safety in the time that has passed since the beginning of this pandemic”.

“You can make anything, but who is going to buy it?”

The impositions the pandemic has put on daily life has sparked protests on nearly every continent.

Berlin saw thousands of people rally over the weekend against virus restrictions, with far-left and far-right demonstrators joined by those supporting widely debunked conspiracy theories.

The protesters — who shouted “We are the second wave” on their “day of freedom” — were mostly not wearing masks, which the German government blasted as “unacceptable.”

On Monday, the country was watching anxiously as 150,000 children returned to school in Mecklenburg-Western Pomerania, Germany’s first state to restart full-time classes after the summer holidays, with infection numbers on the rise again.

In neighbouring France, Prime Minister Jean Castex urged the nation “not to let down its guard” as surging cases led the Riviera resort city of Nice to become the latest to mandate outside mask-wearing during the summer holiday season.

“The virus has not gone on holiday and neither have we,” Castex said.

The pandemic has forced huge changes on many summer events in the northern hemisphere, including China’s famous Qingdao beer festival, which opened at the weekend with its “Beer City” limited to only 30 percent capacity.

Still, many were happy just to attend something.

“It’s been half a year since I last travelled around,” tourist Wang Hua told state broadcaster CCTV. “I feel so happy and relaxed.”

And on the Spanish party island of Ibiza, the government has only allowed clubs with a capacity of 300 or less to open — with mega clubs closed for the season.

Nightclub operators said social distancing would make it impossible to stage the wild parties Ibiza is famous for.

“When we shout, saliva can go as far as two metres (over six feet),” said Jose Luis Benitez, head of the Ibiza Leisure Association.

“Who can keep distances inside a nightclub?”