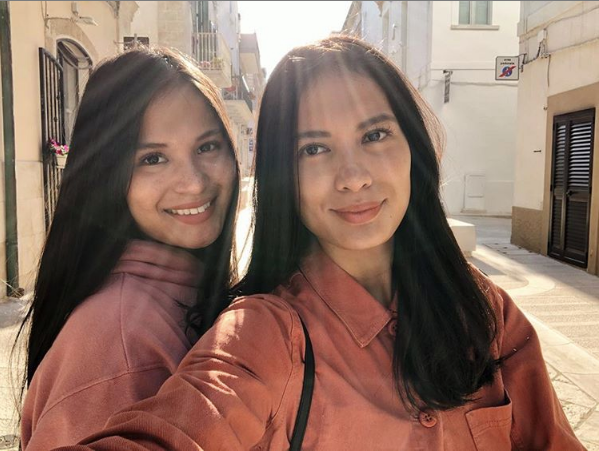 Sisters Isabelle and Ava Daza traveled to Italy for some private time with loved ones, as well as to rest and recuperate.

Isabelle, her French husband Adrien Semblat and their son Baltie posed for a selfie in the city of Lecce, as seen in her Instagram post last April 13.

The actress shared that after their photo was taken, Semblat realized he had accidentally dropped his wallet in the sea. “[S]pent the next hour by the shore searching for it in the seaweed, while he jumped in freezing cold water,” Isabelle said about what happened. “[B]ut good thing we found it!”

Finally got Balthazar his birthday gift ⚽️ this photo was taken before @adriensemblat realized he dropped his wallet in the ocean. 😲 spent the next hour by the shore searching for it in the seaweed, while he jumped in freezing cold water. 😣 but good thing we found it!

While in the town of Polignano, Isabelle showed some sibling love as she had a photo with sister Ava. The actress also made the announcement that she was chosen to be the matron of honor at her sister’s wedding.

Meanwhile, Ava may have hinted that she is eyeing an Italian wedding in her own Instagram post, where she posted a photo with fiancé Luch Zanirato. “Wedding planning with this boy has been too much fun!!” she expressed. “Wish we could do it every other year.”

Wedding planning with this boy has been too much fun!! Wish we could do it every other year 😂❤️❤️

Ava also took a breathtaking photo of Matera, which is considered one of the oldest cities in the world. “Photos don’t do justice to how beautiful this place is,” Ava said.

Visited Matera yesterday. Photos don’t do justice to how beautiful this place is 😍

Her elder sister had her and Baltie’s photo at Matera too. Isabelle also shared that aside from visiting the city, she took the opportunity to do her weighted cardio exercise there as well.

Today’s weighted cardio around one of the oldest cities in the world. People used to live in cave houses that date back to the Paleolithic period; in the 1960’s they were made to evacuate due to hygiene concerns. Also where the film Passion of Christ was shot. Incredible!✨