In awe of Gabby, Jennylyn tongue-tied on first shooting day 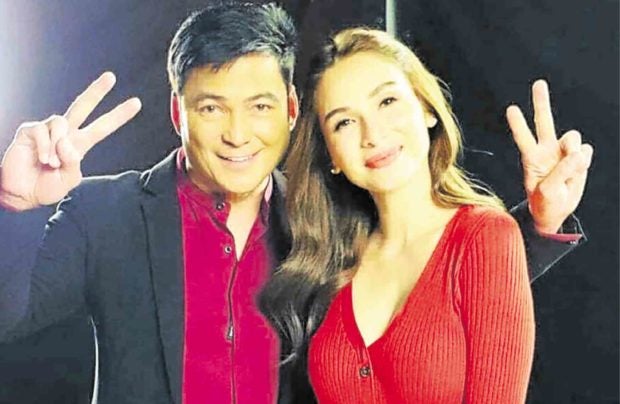 Jennylyn Mercado was so anxious about working with Gabby Concepcion she got tongue-tied shooting their first scenes in the new soap, “Love You Two.”

“I was nervous because, hello, that’s Gabby Concepcion! And on our first shooting day, I kept on buckling—I couldn’t memorize my lines,” she told reporters at a recent press conference.

In the series, Jennylyn plays Raffy, who—despite proposing to her boyfriend, Theo (Clint Bondad)—gets left behind for an overseas job. Heartbroken, she becomes overprotective of her younger sister, who falls in love with an older man, Raffy’s boss, Jake (Gabby).

A love triangle develops later on, as Raffy finds herself getting attracted to the same man. “I was intimidated by Gabby at first, but soon, I realized that he’s kind, caring and a gentleman,” related Jennylyn, who has no qualms doing a kissing scene with the actor, should the script call for it in the
future.

“We have no such scenes, so far. But that’s unavoidable … As a professional, I will do it because that’s work,” the 31-year-old star added. “It’s nerve-wracking, yes—as with every actor I have worked with.”

How does she usually prepare for kissing scenes then? “I try not to think about it,” she related. “Bahala na kung ano ang mangyari or how I feel on the set.”

Directed by Irene Villamor, “Love You Two” airs weeknights starting tomorrow. It marks Jennylyn’s return to the romantic-comedy genre, after doing the horror series, “The Cure.”

“This is my comfort zone. Everyone is just a joy to work with,” pointed out Jennylyn, whose acting talent was noticed in rom-coms like “English Only, Please” and “#WalangForever.”

The thing she can relate to, however, is Raffy’s fierce and unconditional love for her family, especially her 10-year-old son, Alex Jazz. “He recently joined Solenn Heussaff’s painting class, and he has been enjoying it. Solenn told me that Jazz is such a calm and kind kid,” she related.

“Like Raffy, I love and cherish my family, and I will do everything to protect them,” Jennylyn added.