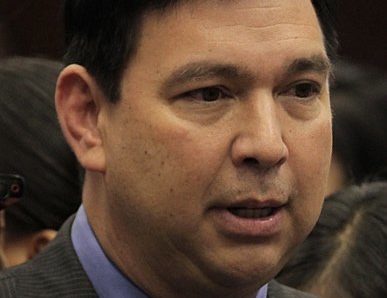 Senate President Pro Tempore Ralph Recto has filed anew a  measure that seeks to put a “debt cap,” or limit, to the government’s loans.

In a statement, Recto said he was pushing for a bill that would set the country’s indebtedness at an amount of not more than 50 percent of its national gross domestic product (GDP).

The senator cited government data that showed that the Philippines’ debt-to-GDP ratio stood at 41.8 percent for 2018, with a debt stock of P7.3 trillion and a GDP value of P17.4 trillion.

So far, the national debt has reached P7.9 trillion as of May 2019, as Recto warned that it was close to breaching the P8-trillion mark by the end of the year.

Recto said the government was only P1.4 trillion away from his proposed debt cap equivalent to half of the GDP. He previously filed a debt cap bill in July 2016.

“It is better to impose a ceiling by law to shield the government, present and future, from piling up debt. We set it at 50 percent of GDP, with the prohibition that the national credit card shall not be maxed out,” he said.

He added: “Setting limits to borrowings will lead to better prioritization of programs and projects as it has to spend within available resources.”

However, placing a debt cap would not limit the government from securing loans to finance infrastructure projects.

Recto said this merely “sets the red line in the debt meter that this and future governments must not hit.”

The senator pointed out that having a limit would “force government to observe credit discipline, constantly monitor the debt needle, and deliver them from the temptation of accepting donor-driven projects of dubious benefits to the people.”

The proposed measure also provides for other conditions in which the debt cap may be temporarily breached, such as catastrophic emergencies of national proportion as may be declared by the President, and upon consultation with Congress.

The President will have to seek authority from Congress to raise the debt cap, which means asserting the legislative branch’s power over the purse.

The measure also requires economic managers to be “more accurate and prudent in their targets on the revenue and expenditure program.”

The finance secretary will be required to submit to Congress a written report on the country’s fiscal position and the modes of government financing every quarter.