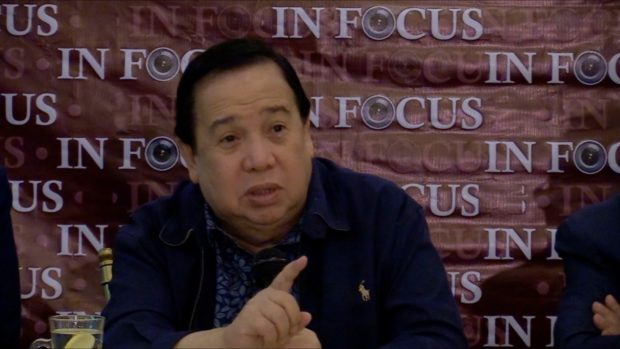 MANILA, Philippines — Even after a “major revamp” in the Philippine National Police (PNP), the Senate is still receiving information on the so-called ninja cops, some of whom were allegedly included in the recent reshuffle of police officials.

Sen. Richard Gordon disclosed this on Monday as he vowed that the Senate would keep close tabs on the police.

“I’d like to commend the President. He got made. So there was an overhaul, right? Everyone’s getting transferred,” he said, speaking partly in Filipino, in an interview with ABS-CBN News Channel. “But I can assure you, the Senate is going to watch with eagle eyes and see whether this thing has stopped.”

The senator, however, did not mention any names.

The revamp covers positions in the PNP headquarters and at regional levels.

Gamboa said he had ordered the massive reshuffling in the organization upon the directive of the President during a command conference last Oct. 15, as well as to introduce “new leadership,” “fresh ideas,” and “new vigor.”

This comes as allegations of drug recycling hound the PNP with its resigned chief, Gen. Oscar Albayalde, facing criminal and administrative charges along with 13 police officers who allegedly recycled illegal drugs confiscated from a questionable 2013 Pampanga drug sting.

Last week, the Senate blue ribbon and justice committees, both chaired by Gordon, released its preliminary report on the so-called ninja cops.

The report recommended the filing of drug and graft charges to Albayalde and the 13 Pampanga cops, who were under his supervision as when he was Pampanga police chief.

But Gordon said the investigation of the joint Senate committee was not yet over.

“With the ninja cops, it’s not yet over,” he said.

Asked if other police officers allegedly involved in drug recycling might also face the Senate inquiry, he said: “Possibly. And if we get these guys to come back, we’ll continue. We’re still looking at the cars. Like the Fortuner, our people are looking for those,” he said.

During a previous hearing, it was revealed that the police officers involved in the 2013 drug sting were supposedly able to buy new sport utility vehicles (SUVs) after they the operation.

“There are reports that there are properties in America, properties in other places,” Gordon added. “Just reports. I don’t want to go into that, but Senate President [Vicente] Sotto [III[ talks about it. We get information. It’s not personal. It’s just that we just want to clean up.”

Gordon also agreed with Sotto on having the bank accounts of Albayalde and the Pampanga police officers be looked into by the Anti-Money Laundering Council (AMLC).

“That’s what AMLC is for,” Gordon said.

He also urged the Department of Justice (DOJ) to “start hustling” the prosecution of cases to be filed against Albayalde and his the Pampanga officers.

“This is going to go the DOJ,” Gordon said referring to the finding of the Senate ninja cops probe.

“They [DOJ] are the ones who are going to prosecute. But I think we have enough for them to prosecute. The Ombudsman, they can also prosecute… I would urge my good friend, [Justice] Secretary [Menardo] Guevarra, to start, you know, hustling. So we’re sending him everything,” he added.

Asked if Albayalde should be put to jail, Gordon said: “If he’s guilty, yes.”

“And that would send a very, very big signal,” he added.

The PNP Criminal Investigation and Detection Group (CIDG) has already filed a complaint against Albayalde and the 13 cops in connection with the questionable operation.

Albaylde, who has denied allegations that he intervened in the dismissal of his men, welcomed the complaint.

“At least I will be accorded due process now,” he said in a text message.