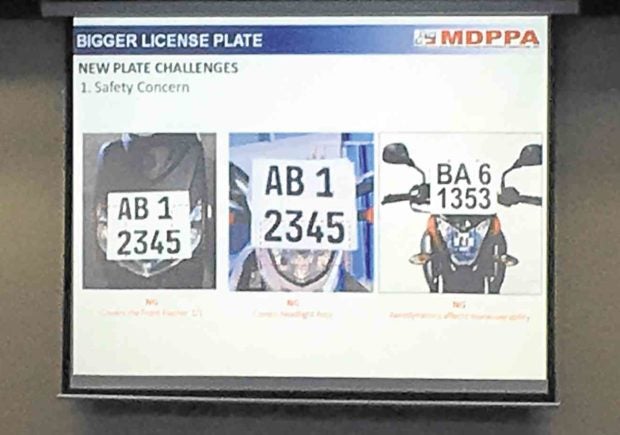 MANILA, Philippines – Senator Richard Gordon on Wednesday renewed his call for the immediate implementation of the new motorcycle license plate law, following a series of crimes in Central Visayas carried out by riding in tandem suspects.

Gordon made the call after four individuals were shot dead in two separate incidents in Cebu City and Mandaue City.

In both incidents, the suspects used a motorcycle to flee the scene.

Gordon said that these incidents underscore the need for the immediate implementation of Republic Act 11235 or the Motorcycle Crime Prevention Act of 2019 which seeks to require license plates displayed in front and at the back of motorcycles.

President Rodrigo Duterte earlier suspended the implementation of the law, citing that would be “dangerous to place another gadget” in front of a motorcycle as it could pierce through the rider’s helmet.

Gordon, however, clarified that a sticker bearing the registration number will be placed in front of the motorcycle and not a metal or tin plate.

The senator insisted that this misconception, which may have been the same information that reached Duterte, is only being used as propaganda by those against the law.

“We really have to do something to stop these killings with impunity. That is why I am calling on the LTO (Land Transportation Office) to craft the IRR (Implementing Rules and Regulations) of RA 11235 as soon as possible so we could immediately implement it. Because this law is meant to obviate crimes perpetrated by criminals using motorcycles as get-away vehicles,” Gordon said in a statement.

Gordon said that current license plates are too small for witnesses to take note of, adding that in some cases, criminals even remove the plates to avoid giving leads to investigators.

“Kapag inimplement na natin ang RA 11235, huhulihin na ang mga motorsiklo na tumatakbo ng walang plaka at madali na ding mabasa at matandaan ang mga plaka. Kaya this law will give protection to the public, pati rin sa mga may-ari ng motor na ninakawan ng motorsiklo (Once RA11235 is implemented, we will apprehend those who use motorcycles without license plates. It will also be easier to read and remember plate numbers. This is why this law would not only give protection to the general public, but specifically motorcycle owners whose vehicles were stolen),” added Gordon. /gsg