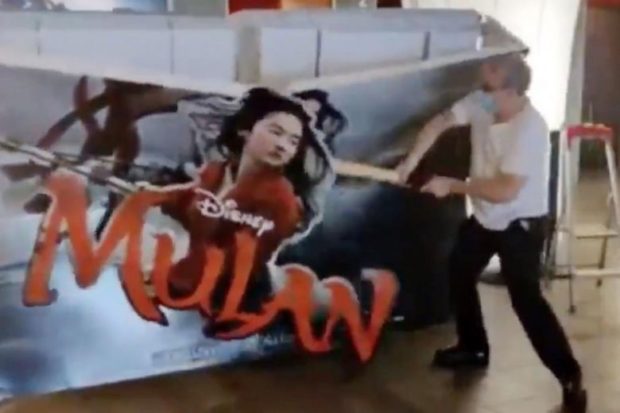 SINGAPORE — Movie fans who were looking forward to watching Mulan on the big screen would have been deeply disappointed after Disney announced last Tuesday (Aug 4) the blockbuster movie would not be shown in cinemas in most countries.

The entertainment giant said Mulan would instead premiere on streaming platform Disney+ in September after its cinematic release had been delayed several times since March because of the coronavirus pandemic.

However, an independent cinema owner in France took his disappointment and frustration one step further over Disney’s move.

In a video posted on Twitter and which went viral later, Mr Gerard Lemoine was seen using a baseball bat and smashing the pop-up promotional poster of Mulan.

In an interview with Hollywood trade publication Deadline, he said he had been promoting Mulan for months and was hoping the movie would provide a boost for his cinema which, like many cinemas around the world, has been dealing with a falling number of cinemagoers due to the pandemic.

“It’s really a huge effort to stay open right now for most of us, but we were assuming there would be some ambitious movie releases in the coming weeks,” he was quoted by Deadline as saying. “By losing Mulan, we lost the possibility of offering our audiences a long-awaited film that would have helped us after these past hard weeks.”

Mr Lemoine said he was surprised by the overwhelming reactions to his video, which has attracted more than 1.9 million views as of Sunday.

In the viral video, the movie poster of director Christopher Nolan’s sci-fi action feature film Tenet was seen behind the fallen pop-up advertisement for Mulan.

Mr Lemoine said he hoped Tenet would be released on Aug 26 as scheduled.

“We thank Warner a lot for releasing Tenet in late August. But it’s not enough,”he said. “Studios need to understand that if they cancel these films or put them on platforms, I won’t be able to last very long.”

He is not the only cinema owner angered by Disney’s decision.

Cinema owners in Britain told Deadline that they were blindsided by Disney’s move, with one movie exhibitor describing it as “cruel” and another accusing Disney of “taking all the revenue” by moving Mulan to its streaming platform.

Mulan opens in cinemas in Singapore on Sept 4.