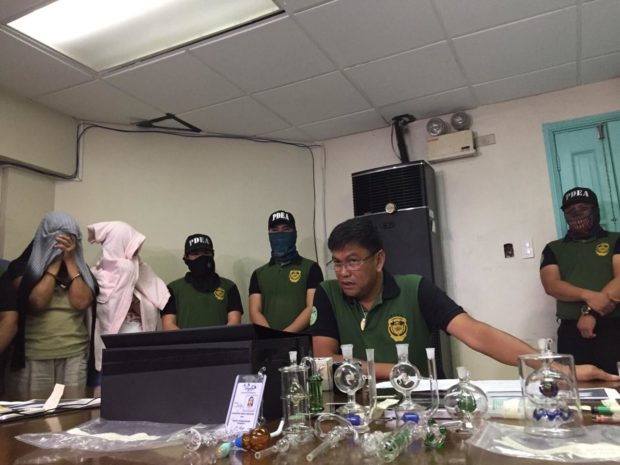 MANILA, Philippines — A former model for a men’s lifestyle magazine was arrested by operatives of the Philippine Drug Enforcement Agency (PDEA) and the local police in Taytay, Rizal for allegedly selling illegal drugs.

In a report, Levi Ortiz, director of the Special Enforcement Service (SES) of PDEA, identified the suspect as Charlene “Cindy” Mecayer, 24.  PDEA agents nabbed Mecayer in a buy-bust operation in an apartment in Barangay Sta. Ana at about 4:30 p.m. Wednesday.

Also seized from her were the P500 buy-bust money and her cellphone used in the transaction.

Cases for violation of Section 5 for selling prohibited drugs, Section 11 for its possession, and Section 12 for possessing paraphernalia under Republic Act No. 9165 or the Comprehensive Dangerous Drugs Act are now being prepared for filing against the suspect.

The operation was launched at about 10:30 p.m. also on Wednesday.

Seized from Dudley were a large pack of suspected shabu weighing around 50 grams and worth P340,000, P500 cash used in the bust, and the cellphone used in the transaction.

A case for violation of Section 5 of RA 9165 will also be filed against the suspect.