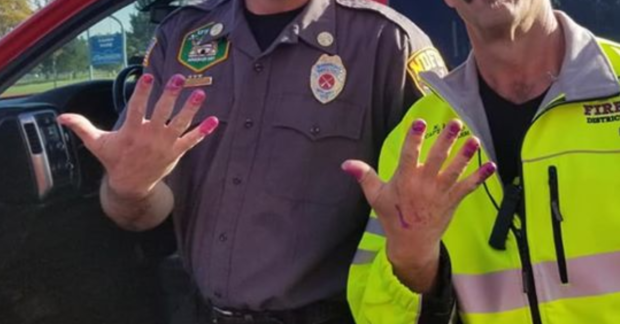 When two firefighters arrived at the scene of a car crash in Utah, USA, they encountered a screaming toddler.

Two-year-old Braelyn Fernelius must have been shocked after a car rear-ended the vehicle she and her pregnant mom, Jocelyn, were riding in last Oct. 11. The mom and daughter had been on their way to visit Braelyn’s grandmother, KSTU reported on Oct. 15.

Two first responders, Capt. Kevin Lloyd and Battalion Chief Allen Hadley, arrived to assess the situation and saw that it was a minor accident and no one was injured.

However, they could not ignore the upset Braelyn who was screaming, with her mom feeling distraught about the situation.

Lloyd approached the toddler and noticed the nail polish she was holding. Jocelyn told KSTU that she had grabbed the bottles of nail polish before they left the house.

As Lloyd asked her about the nail polish, he opened the bottle and the little girl began to calm down as she painted his nails in purple. Hadley joined in the manicure session and got pink nails.

It took only minutes before Braelyn was pacified. “Every time she switched colors, she would just let out this boisterous laugh and just be excited,” Hadley was quoted in the report.

This is how amazing our firefighters are. Our A shift Battalion Chief and Captain were on the scene of a motor vehicle…

Besides Jocelyn getting to relax, the responders enjoyed their time with Braelyn. “She’s adorable,” Lloyd said. “We asked if we could keep her.”

Braelyn has found a new willing customer too in her own dad, Brandyn Fernelius. He said in the report, ”She’s never painted anyone’s nails before, and now she asks me all the time since Friday (the day of the accident).”  /ra