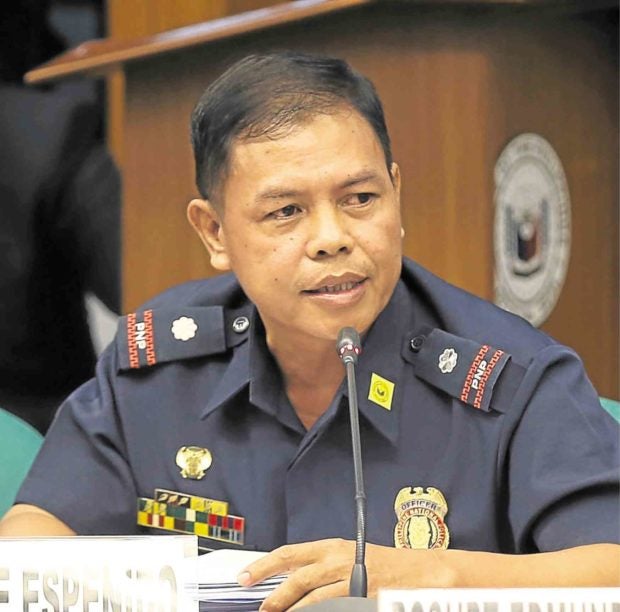 In a media interview, Espenido on Tuesday said his inclusion was the result of the “failure of intelligence” among the police.

“I will deal with Espenido squarely as the PNP chief and he being a member of the PNP,” Gamboa said, referring to his “general instruction” asking the 357 policemen in the drug list to keep their counsel.

“As a matter of fact, we are coming up with social media protocols for PNP personnel,” Gamboa added during an interview on Wednesday at Camp Crame.

Espenido, already the subject of adjudication, or the process of double-checking whether he deserved to be listed in the first place, also wants an investigation into the people behind his inclusion in the narcolist.

“Politicians surely because I do not see any other (people) who would want me in the list. And maybe even PNP (personnel) … (whom I crossed) while doing my job,” he said in a press conference in Bacolod City on Wednesday.

“My conscience and integrity are intact. I appreciate the fact that President Duterte has said that he believes I am clean,” Espenido said.

“I apologize to my superiors for speaking in public now. I hope they understand my situation,” said Espenido.

Interior Secretary Eduardo Año stood by the reliability of the narcolist that, he said, was sourced from the PNP, the Philippine Drug Enforcement Agency, the National Intelligence Coordinating Agency, and the Intelligence Service of the Armed Forces of the Philippines.

The burden of proving their innocence falls on them, he said of the policemen included in the list.

Gamboa said he would submit the findings of the national adjudication board to Duterte on March 5.

Espenido has often been described as Duterte’s “drug warrior,” for conducting raids that often resulted in the death of powerful suspects, including Ozamiz City Mayor Reynaldo Parojinog who was killed with 14 others in 2017.

Espenido was also the head of the Albuera town police in Leyte when its mayor, Rolando Espinosa, was killed by policemen during a midnight raid.

—With a report from Carla P. Gomez