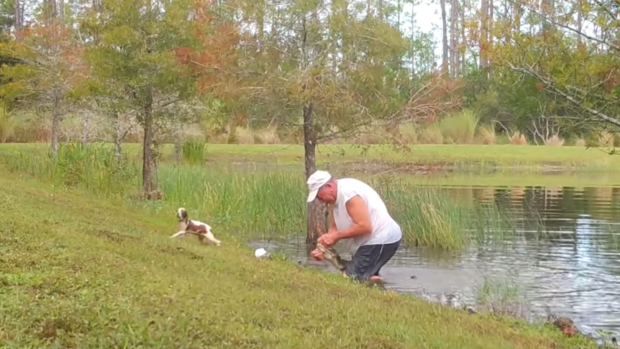 An elderly man used his bare hands to pry open the jaws of an alligator that suddenly clamped onto his puppy in Florida, USA.

Richard Wilbanks and his 3-month-old puppy, Gunner, were walking near his backyard pond at the end of October when the reptile attacked. After latching onto the dog, the alligator quickly dragged it back underwater, as per the Fort Myers News-Press on Nov. 21.

Wilbanks then jumped into the pond and forced the alligator’s mouth open as Gunner yelped. Once the alligator loosened its bite, Gunner quickly ran off to dry land.

“[The alligator] just came out like a missile,” Wilbanks told CBS-affiliate WINK.

By now, you';ve likely seen THIS video. It was captured on a nature camera as part of our Sharing the Landscape Project with the FStop Foundation.For this project, volunteers were selected and cameras were placed in their backyards to document wildlife that live and share the landscape with the residents. Education is one of the most important tools to help reduce human-wildlife conflict. In this particular incident, we are so thankful that Gunner, Mr. Wilbanks, and the gator are all alive and well. Gunner will now be leashed for his outside time to prevent any other curious adventures to the water';s edge in the future!To learn more about this initiative, visit https://floridawildlifefederation.org/sharing-the-landscape/

Though Gunner sustained a small puncture wound and Wilbanks’ hands were “just chewed up,” he assured that they are now doing fine.

While Gunner is now “a little hesitant” to approach water, Wilbanks considers the incident a learning experience. He also promises to always keep Gunner on a leash and away from water from now on.

“I would like to emphasize for people that have pets to make sure that they keep them away from the edge of the water,” Wilbanks told the news outlet.

“We don’t just want to tolerate wildlife, but, rather, we want to thrive with wildlife on a shared landscape,” she said in the report.

Wilbanks’ wife, Louise, echoed her sentiments, adding that the campaign gives them a “new appreciation” for wildlife.

“We do need to be aware they are wild animals. They’re not here for our benefit,” Louise said. “We’re very lucky to share this space with them.” Ryan Arcadio /ra