Duterte rebukes Robredo for disputing him on 'gift' policy for cops 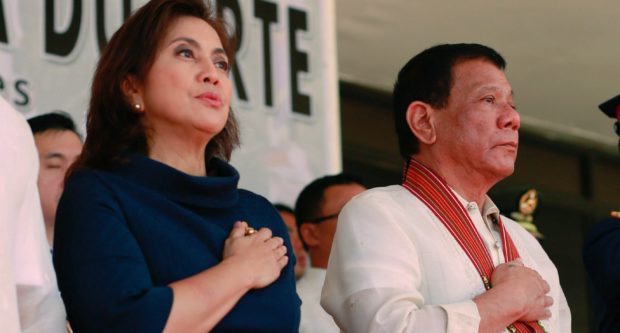 MANILA, Philippines — “Kung ikaw ang Presidente ng Pilipinas, patay. You do not even read a book.”

President Rodrigo Duterte on Tuesday directed this statement to Vice President Leni Robredo after she criticized him on his remark that government officials can accept gifts of nominal value and out of gratitude.

Duterte also mentioned Senator Panfilo Lacson but he said that he can forgive the former police chief because he is not a lawyer.

“I quoted the very words (of) anti-graft and corrupt practices. There are exemptions, nominal and I used the word nominal and out of gratitude,” Duterte said before recipients of the Outstanding Government Workers Award in Malacañang.

Duterte last month said there is nothing wrong with policemen accepting “gifts” from families who are grateful for their work, insisting that accepting gifts out of “gratitude” cannot be considered a violation of the law.

“It is not bribery because it is allowed by the law. What I mean is if there is generosity and then sabi ng anti-graft you cannot accept gifts, kalokohan ‘yan,” Duterte said.

“If you’re able to solve a crime and the family would like to be generous to you or nurture a feeling of gratitude for what you accomplished then you accept wala akong…but to us that is something,” he added.

But Robredo said law enforcers who would accept bribes from those involved in their cases would be “biased.”

The Vice President cited Section 7(D) of the Code of Conduct And Ethical Standards for Public Officials and Employees (Republic Act No. 6713), which prohibits the solicitation or acceptance of gifts.

That section states: “Public officials and employees shall not solicit or accept, directly or indirectly, any gift, gratuity, favor, entertainment, loan or anything of monetary value from any person in the course of their official duties or in connection with any operation being regulated by, or any transaction which may be affected by the functions of their office.” /kga