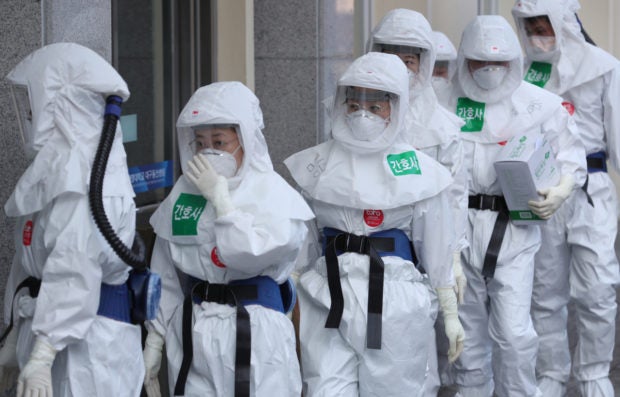 SEOUL — Amid a dose of optimism Thursday after counting the lowest number of new infections in a single day, South Korean health authorities are growing uneasy over the steady increase in the number of patients who have tested positive twice.

As of Thursday at 12:01 a.m., Korea had 74 patients who had tested positive for the virus for a second time, up nine from the previous day, according to the Korea Centers for Disease Control and Prevention.

Reactivation of the virus is the most probable explanation for the phenomenon, rather than reinfection, health authorities said, adding that investigations were underway to understand what exactly happened.

Of the repeat patients, 25 were in Daegu, the local epicenter of COVID-19, and made up the largest proportion of the total, stoking fears of a second wave of infection.

After following up with virus survivors, the city found 316 symptomatic people, or 6.6 percent, experiencing fever and cough, according to Daegu City.

Daejeon, Korea’s fifth-largest metropolitan city, on Thursday confirmed its first patient to have tested positive for the virus twice.

The patient, in her 40s, had been discharged March 27 after testing negative, but was confirmed to have the virus earlier this week.

Two patients who have caught the virus twice were identified in Cheongju, North Chungcheong Province, during an inspection the city carried out to follow up on its nine COVID-19 survivors, according to Cheongju City.

One of the patients was a 4-year-old boy who had fully recovered and returned home on March 20.

“The ratio of patients retesting positive is very small even if were to see more cases. … It is important to examine the virus and check for infectivity in these cases,” said Kwon Joon-wook, deputy director of the KCDC, in a daily virus status briefing earlier in the week.

Local epicenter North Gyeongsang Province reported the death of an 85-year-old woman who died at a nursing home Wednesday, nine days after she was declared virus-free, the provincial government said.

Her death is thought to have resulted from the effects of the virus coupled with cardiovascular and cerebrovascular diseases, it added. She had not caught the virus twice.

KCDC Director-General Jeong Eun-kyeong took a cautious approach to drawing a correlation between her bout with COVID-19 and her subsequent death.

“It is not the most precise to say the (elderly lady) passed away after a recovery. … We will receive her records or death certificate and examine the cause of her death through the central clinical committee,” Jeong said.

Four people have died and the death toll stands at 204, it added.

The number of those released from isolation upon recovery rose by 197 to 6,973, data showed.

The Famous Friends of Jeffrey Epstein