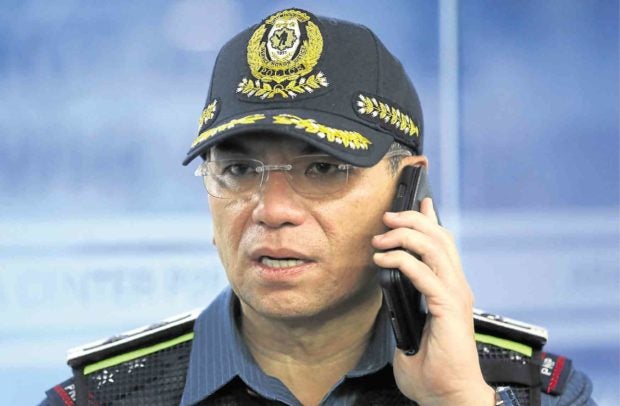 “On the presence of the mass base, we can see the urban poor more in the Camanava area. That’s where they are,” Eleazar, speaking partly in Filipino, said at a press briefing on Tuesday, following a joint meeting between the Metro Manila Regional Development Council (RDC) and Regional Peace and Order Council (RPOC) in Pasay.

Eleazar serves as the interim chair of the RPOC.

According to him, these groups go to Camanava to convice people there to join rallies — which will form part of “front activities” supporting their armed component.

During the meeting, the National Capital Region Task Force to End Local Communist Armed Conflict (NCRTF-ELCAC) was formally created as a part of President Rodrigo Duterte’s 2018 order for a “Whole of Nation” approach for sustainable peace.

The special task force seeks to counter the recruitment of groups such as the Communist Party of the Philippines and the New People’s Army and their “deceitful propaganda” in schools and poor communities in Metro Manila.

The task force also seeks to ensure direct delivery of social services to the poor, whom the authorities said were the preferred targets for recruitment.

“That’s why one of the efforts we are doing is to engage the different sectors that may be easy or vulnerable to the recruitment of the CPP-NPA,” Eleazar said. “And these are the workers of different companies and business establishments that may be penetrated by these groups. And eventually what they are after is to make their economic activities collapse.”

He noted that the recruitment of students was “no longer a secret.”

“Even those who were students before that were recruited by the NPA, they themselves become recruiters and return. It becomes their turn to speak. We know what’s happening,” he said.

“These things now, more than ever, we see that awareness of the public is there,” he added. “We started this, and the momentum is ongoing. So with the objective of the creation of the task force to end the local armed conflict, we will pursue this in Metro Manila and all regions of the country.”

For his part, Interior Undersecretary Ricojudge Janvier Echiverri stressed that “to curb the problem is to address the real issues” — notably, poverty and labor disputes.

“On the part of DILG, we were tasked to monitor specific activities and programs for which the local program should follow. Number one, if the city is identified as having many urban poor people who are left-leaning, they should set a dialog at least with them,” Echiverri said.

This, he said, would be achieved in coordination with local governments.

At the moment, Echiverri said, they had been reaching out to vendors and tricycle drivers and asking local governments if they already have alternative sources of income for these people.