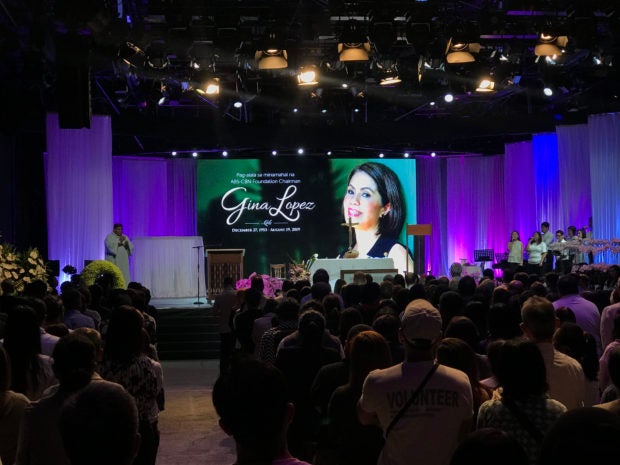 MANILA, Philippines — Former Environment secretary Gina Lopez was prepared for her demise with her last words being the heaven is already waiting for her.

This was according to her brother ABS-CBN Publishing Inc. chief Ernie Lopez who shared the last moments of Gina on the last scheduled public viewing for her remains Friday night.

“She’s prepared. She said the angels are waiting for her. I hope we can make public some of her last words. She was saying that she feels that heaven is beautiful, it’s ready for her and it’s waiting for her,” Ernie said in a pocket interview.

Even to the last breath of Gina, Ernie pointed out how she still thought of other people. In fact, Gina introduced her brother to the person he is dating now which he considers as her “last gift.”

“She introduced me to the person I am with now. I said, ‘Gina, look, this is your last gift to me.’ And she squeezed my hand and she squeezed her hand,” Ernie recalled.

He continued: “When I visited her in the hospital, the girl I met works in the hospital, then Gina asked: ‘What’s your name? How old are you? Are you married? And I want you for my brother.’ Ganun si Gina even in her dying breath, she pours love out, she puts people together.”

ABS-CBN Corporation’s chairman emeritus Eugenio “Gabby” Lopez III, on the other hand, recalled how Gina was more concerned of others than herself, this time with the former’s dog.

“I rushed back from abroad on news of her impending demise. She asked me about my dog. I said, ‘she (dog) was quarantined.’ But she said, ‘That dog loves you and misses you. Go straight to your dog,’” Gabby reminisced in his eulogy.

“Meanwhile, I was left down struck. Because she had stage 4 cancer and she was worried about my dog,” he added, with the family and friends breaking into laughter.

“So maybe it’s time for us to amend our slogan to ‘In the service of the Filipino and their dogs,’” he said, in jest. “You will be missed, Gina.”

Gina, who was chairman of ABS-CBN Foundation, passed away last Aug. 19 at the age of 65.