Binay urges Duque: 'High time to do some soul-searching' 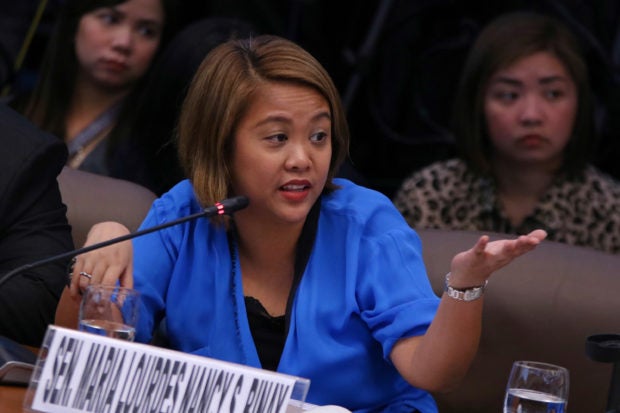 MANILA, Philippines— It is hight time Health Secretary Francisco Duque III should do some soul-searching to know if he can still do his job, Senator Nancy Binay said on Tuesday.

Binay made the call as she shared Senator Panfilo Lacson’s frustration over President Rodrigo Duterte’s refusal to sack his health chief over his present handling of the COVID-19 pandemic.

(I share the same sentiment of Senator Ping because we saw that Secretary Duque could not really handle our problem with COVID.)

She then cited the Department of Health’s failure to immediately conduct contact tracing when the first case was reported in the country and its lack of testing capability at the onset of the pandemic.

“So  nakaka-frustrate (it’s frustrating)  but you know at the end  of the day it’s the call of the President whether to let go of Secretary Duque,”  Binay said.

“But maybe it’s high time for the Secretary to do some soul-searching if he really can do the job baka kelangan sa kanya na manggaling (maybe it should come from him),” she added.

Binay  pointed out that as an alter ego of the President, Duque’s position is crucial on how the country could win the battle against COVID-19.

“And so far he’s not doing the right job in solving this problem,” the senator  stressed.

She also surmised that Duque may also lack the convincing power that he could not get the President to listen to his suggestions on how to  address the pandemic.

Binay and Lacson were just among the 14 senators  who signed a Senate resolution in April, .

Despite this, and even defended him from his critics.