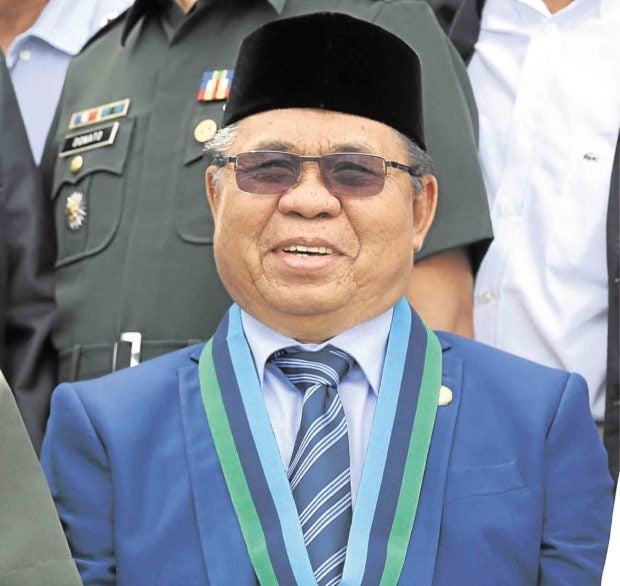 BULUAN, Maguindanao, Philippines — Thousands of regular employees at the Bangsamoro Autonomous Region in Muslim Mindanao (BARMM) have received their salaries late while the new ones, including interim Chief Minister Murad Ebrahim, have not been paid at all, the Inquirer learned last week.

Avila Abobakar, administrative management services director at the Office of BARMM Chief Minister, said BARMM ministers and their newly-hired staff have not received their salaries in the absence of an administrative code for the new region and unresolved issues concerning Civil Service Commission rules.

“The crafting of the administrative code is a priority measure of the parliament,” he said, referring to the Bangsamoro Transition Authority (BTA), the body that will govern the BARMM until its regular officials are elected in 2022.

The code, among other things, will determine the salary grades for the different positions at BARMM, Abobakar told the Inquirer by phone.

In the meantime, the salary grades being applied in the BARMM for its regular employees were the rates that prevailed in the abolished Autonomous Region in Muslim Mindanao (ARMM), he said.

However, he said, the BTA would still have to determine, through the administrative code, if such rate would still be applied to the chief minister.

Lawyer Naguib Sinarimbo, the BARMM’s minister for local government, said the employees under his agency have been paid the wages due them.

“But I have yet to receive my salary,” he said, blaming the voluminous paperwork for the delayed wage of the new BARMM workers.

Sinarimbo was appointed to the local government ministry by Ebrahim after the latter assumed as chief minister in February.

When the BARMM took over, only the ARMM Regional Legislative Assembly became automatic members of BTA. The ministers of the different ministries under the new entity were all appointed by Ebrahim.

The ARMM’s 6,300 employees were laterally transferred to equivalent or renamed agencies, such as from the Department of Environment and Natural Resources to the Ministry of Environment.

The BARMM was established after the two plebiscites in January and February resulted to the ratification of the Bangsamoro Organic Law, which was anchored on the Comprehensive Agreement on the Bangsamoro, the final peace deal signed in 2014 by the government and the Moro Islamic Liberation Front after four decades of conflict.

The BARMM is composed of the provinces of Maguindanao, Lanao del Sur, Basilan, Sulu and Tawi-Tawi, the cities of Marawi, Lamitan and Cotabato (the newest member), and 63 villages in North Cotabato province.

Abdullah Cusain, assistant executive secretary at the Office of the BARMM Chief Minister, said the regional government’s finance, budget and management services had transmitted the notices of transfer allocation (NTAs) to the Land Bank of the Philippines branch in Cotabato City only on April 8.

The NTA is an authority issued to a bank allowing or informing it that a specified amount be credited to a particular agency or office.

The regular budget for March and April 2019 was credited to BARMM’s account only on April 1, Cusain said.

He said the delayed salary for March was due to the voluminous paperwork and considerable man-hour needed to produce the NTAs.