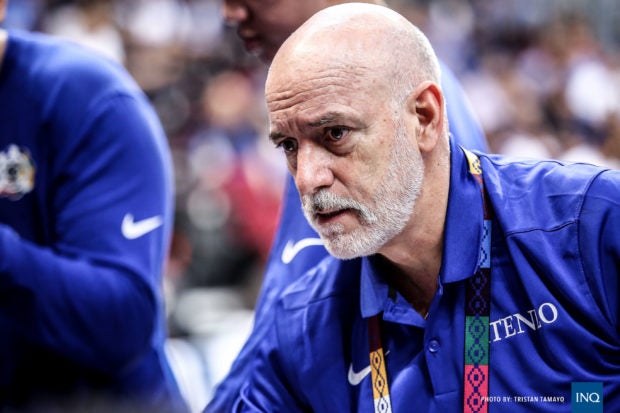 Ateneo coach Tab Baldwin is expected to have a major role in the program reboot that the Samahang Basketbol ng Pilipinas (SBP) is putting in place—but it won’t be as Gilas Pilipinas head coach.

“He has begged off from coaching,” said SBP chair Manny Pangilinan, who added Baldwin is being eyed as program director for Gilas Pilipinas, the chief architect who will draw up the blueprint for the national team for the next two World Cup cycles.

A major part of the SBP reboot is to split the roles of program director and head coach into two positions, and Pangilinan said that filling the spot of chief tactician of Gilas Pilipinas will take longer than expected.

“The program will drive the choice of the coach,” Pangilinan said, which means Baldwin’s blueprint will determine the selection of the new coach for the national team. While the SBP has hinted it will most likely be a foreign coach, everything will depend on Baldwin’s direction for the Gilas program—which will include Batang Gilas, the cadets and the senior elite teams.

In the interim, the SBP has offered coach Tim Cone to head the Gilas Pilipinas squad that will compete in the 30th Southeast Asian Games—and SBP president Al Panlilio is optimistic Cone, a two-time Grand Slam coach and owner of the most number of PBA titles, will give his nod.

“Knowing Tim, he wants to contribute whatever way he can to the country,” Panlilio said on Saturday.

“And knowing [San Miguel sports director] Al [Chua], they also want to contribute a lot to the national program,” added Panlilio, who is in talks with Chua regarding the Cone offer.

Cone, in a statement, said he won’t make any decisions yet until Monday at the earliest, when he meets with Panlilio again.

“At this time, however, my total focus is on our Ginebra game versus Alaska [on Sunday] to open the Governors’ Cup,” Cone said. “On Monday, and after talking to my family, Mr. Panlilio and I will continue our conversation regarding the appointment, at which time we will come to a resolution.”

Cone already served as national coach during the 1998 Asian Games in Bangkok, where he steered the Philippine five, then known as the Centennial Team, to the bronze medal.

If he accepts, Cone will have a free hand in determining the national pool and the final roster for the SEA Games.

Chot Reyes, who used to be Gilas program director and national coach, had already drawn up a succession plan that included Baldwin’s name for the 2023 World Cup.

“Tab will get inputs from Chot,” Pangilinan added.

Panlilio said the program that will be put in place will have medium- and long-term goals and while it will not exclude PBA players still, it will include developing “a dedicated team” made up of a bumper crop of amateur stars “who might even join PBA tournaments as a team.”

“By 2027, these guys should be physically ready [to represent the country],” Panlilio added.

Pangilinan doesn’t discount the possibility of some of those amateurs being named to the national pool—or squad—for 2023, together with PBA stars. But the important thing, Pangilinan said, is the plan should look at more than just one World Cup cycle.

“I told Al [we should look] not just at 2023 but beyond that,” Pangilinan said. “In our lifetime, we won’t see the Philippines become a world champion. But at least, with every World Cup, we [should] participate, that should be our norm.”

Pangilinan said that with every Philippine participation, “our ranking should improve, our performance should improve even if incremental lang.”

Panlilio added that SBP will cast a wide net in the search for national coach with the search process, hoping to follow the Argentina model.

“Argentina has a core of coaches that stay together,” said executive director Sonny Barrios. “That’s why there is [program] continuity.”

But Pangilinan said not to expect a coach to be named anytime soon.

“If we name one now, he has no team to coach,” said the telecommunications tycoon. “So the search [for a coach] is probably going to take a bit longer. —WITH A REPORT FROM MUSONG R. CASTILLO