All they want for Christmas is a place to call home 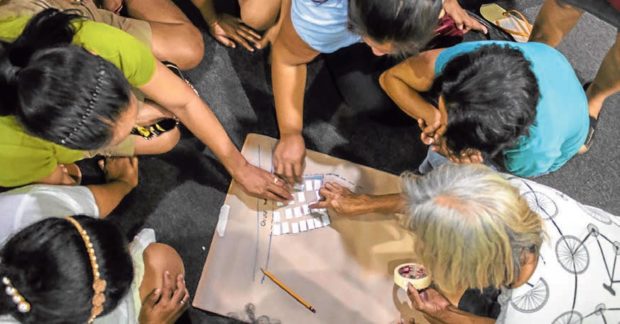 MANILA, Philippines — Written on a piece of Manila paper is a simple creed that residents of Sitio San Roque in Quezon City aspire to live by.

It reads: “Sitio San Roque is a community of cheerful, dignified and unified members hoping for clean, decent and affordable on-site housing, with access to livelihood opportunities and basic social services.”

But the 5,000 residents — mostly vendors, tricycle drivers and utility workers — live in fear of being evicted from their houses to give way for development projects under the proposed Quezon City Central Business District (QCCBD).

Sitio San Roque sits on government-owned land that is part of the 256-hectare QCCBD.

Since 2018, the Save San Roque Alliance — a network of academics, professionals, students and writers — has stepped up to help the remaining residents “rebuild their homes, their dignity and their right to the city” through a professional and community-led development plan.

“Our struggles here are historic — from the time when the first families came here to plant crops and fruits to how the green spaces we used to have were slowly turned to commercial establishments,” said Estrelita “Ka Inday” Bagasbas, 64, who has lived in San Roque for 35 years.

Bagasbas said families were refusing to take existing offers to relocate for two reasons: the lack of socialized housing in the city and a dearth of access to livelihood opportunities, schools and hospitals in relocation sites in the provinces.

More than half of San Roque residents are working in the informal sector, with 59 percent of their jobs located in Quezon City.

“All available relocation sites now are the same. They would tell us that the houses are standard, but are living conditions and access to opportunities standard as well?” Bagasbas said.

Since most residents are renters who pay around P1,000-P1,500 a room, they are pushing for affordable socialized housing from the local government for those with the capacity to pay monthly rent.

Community dev’t planOne solution, according to architect Jmar Atienza who is one of the conveners of the Save San Roque Alliance, is crafting a community development plan (CDP) — an approach backed by laws to protect urban poor communities.

The CDP advocates for collaboration and proper consultation in drafting the most appropriate housing scheme for the affected community.

But building their CDP from scratch was not an easy task for Bagasbas and her neighbors.

“It’s very difficult and technical. We [knew we would] need engineers, architects, lawyers, Church people and other professionals to be able to come up with a collective strategy — something that won’t easily crumble,” Bagasbas said.

Atienza said around 140 individuals from various professions had expressed interest in joining the initiative, including architects, geographers and interior designers from the University of Santo Tomas and the University of the Philippines.

Their CDP, which they intend to present to Quezon City Mayor Joy Belmonte at City Hall today, included a workshop on building the residents’ dream house, countermapping and visualizing their proposed housing units.
The Dream House Workshop series, for instance, helped them collectively draft house designs for their community housing based on their individual needs and wants.

Most of them, said volunteer Michelle Bacabac, opted for units with space for a sari-sari (retail) store, a parking spot for their motorbikes or a spacious living room for the family.

“We never thought we would also have the capacity to think about and design our dream houses,” Bagasbas said. “For years, we’ve relied only on pieces of aluminum sheets or cartons to build makeshift walls and living quarters.”
One of the strategies that Atienza’s team initiated is guiding residents in building their own community maps — where collective memory and history can harness shared stories and struggles to help them solidify their call.

During one of their mapping sessions, resident Lourdes Jermias, 48, helped the team plot on a map through colorful post-it notes the locations of former landmarks and establishments in the community, some of which were already demolished, burned or destroyed over time.
She recalled them one by one: the basketball court, mosque, the chapel, and community market, among others.
“Even if we’re poor, we still have a right to the city. We know we need to pay for decent housing but we also need government subsidy to help us start over,” Jermias said.

At the core of the CDP, according to volunteers of Save San Roque Alliance, is a collective vision for decent living and a concrete picture of what their dream community should look like, something that rapid urban development has made difficult for them.
On Jan. 13, the group hopes to hold a dialogue with Belmonte to get her to acknowledge and implement their proposal.
Until then, residents can only hope that the local government will recognize their initiative — anchored on a long history of struggle, faith and hope. INQ”