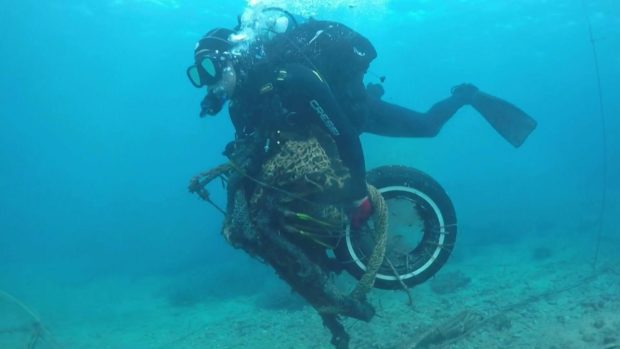 Dressed in her protective wetsuit and scuba gear, Antigone Kouteri jumps into the murky waters of Zakynthos harbor in search of plastics — and promptly snags her arm on a submerged object.

“It was a tire,” offers her patrol mate Efthymis, coming up with a discarded beer bottle. “My treat!” he jibes.

The Ionian island of Zakynthos is one of Greece’s most pristine travel destinations, renowned for its azure waters and fabulous beaches, an environment clean enough to be a major Mediterranean nesting ground sought out by loggerhead sea turtles.

But even here, plastic pollution poses a grave threat to wildlife.

Kouteri is one of nearly a dozen volunteers from Aegean Rebreath, a Greek organization formed in 2017 to protect Aegean biodiversity from waste.

“Marine litter is a global issue, so it is (present) in Greece. More than 70% of marine litter is plastic in Greece,” says Katerina Tsagari, a biologist at the Hellenic Centre for Marine Research (HCMR) near Athens.

Tsagari says her team has found litter, most of it plastic, in about 75% of loggerhead sea turtles tested.

Overall, they have found plastic ingestion in between 20% and 45% of the species tested, which include fish and mussels.

With a coastline of some 14,000 kilometers (8,500 miles), one of the longest in the southeastern Mediterranean, Greece attracts tens of millions of tourists every year.

It’s a regional problem. The Mediterranean, a partly closed sea, accumulates 570 million kilograms of plastic annually from surrounding countries, according to the World Wildlife Fund (WWF).

WWF has reported that Greece produces 700 million kilograms of plastic per year or 68 kilos per capita. Out of that 11.5 million kilos end up in the sea, it said.

‘Junkyard’ beneath the waves

“There is a junkyard beneath the blue waters,” says Violetta Walczyk, a Greek-Polish lawyer active with Aegean Rebreath.

On the Cycladic island of Andros, mounds of waste from a 2011 hilltop landfill collapse are still to be found in the sea below.

In its two years of operation, Aegean Rebreath has amassed 9,000 plastic water bottles 3.6 million kilos of fishing net and 289 tires.

The government readily admits that nearly 40,000 kilos of plastic waste ends up in Greek seas every day.

It recently started a campaign to phase out single-use plastics such as cups and straws — no small feat in a country with a huge coffee-to-go market.

Speaking to Agence France-Presse last month, Prime Minister Kyriakos Mitsotakis said that marine protection was a “key priority” for a country so dependent on tourism.

Greece continues to pay millions of euros in fines to the European Commission concerning the operation of illegal landfills.

“Recycling in Greece is a joke,” snorts George Sarelakos, the co-founder of Aegean Rebreath.

“Every municipality has its own policy, there is no central strategy,” he told AFP.

George Triantafyllou, the HCMR’s head of research, says the institute is coordinating a European project, Claim, across 13 European countries in addition to Tunisia and Lebanon to eliminate microplastics.

The project includes developing photocatalytic technology to accelerate the degradation of microplastics in seas and rivers, he notes.

The HCMR has also helped develop a floating litter-collection barrier that is currently deployed at the mouth of the Kifissos river in Athens.

“I believe everybody should change habits. We don’t have to use plastics in our everyday life,” says George Triantaphyllidis. CL/JB