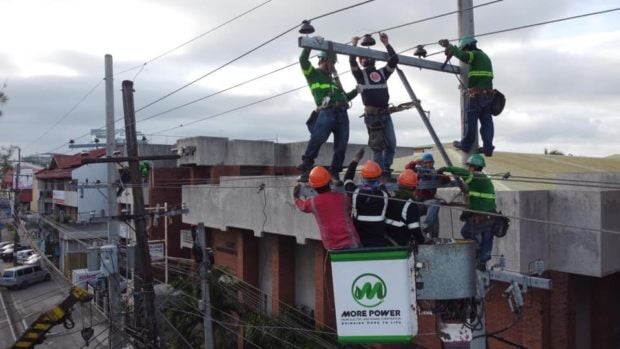 MANILA, Philippines — The new electric service provider in Iloilo City was able to discover and cut at least 3,000 illegal electric connections, after stringent door-to-door operations in the said city.

In a statement from More Electric and Power Corp (More Power), which now handles electric provision after the Panay Electric Co. (Peco) lost control of the area, this is good progress in terms of finding where the illegal connections are.

“Apprehending illegal electric connections is a taxing task and most definitely involves the greatest risk on the part of the apprehenders but the efforts to rid the city of illegal connections are certainly paying off,” More Power’s Ariel Castañeda said.

“For about two weeks of operations, we were able to apprehend more or less 3,000 illegal connections or jumpers, about 1,000 of which we have already converted to load applications. Of the said number, 600 already went to the City Engineer’s Office (CEO) to secure the needed requirements while 400 have already paid for new connections,” he added.

However, the company also revealed that a study by private contractor MIESCOR Engineering Services Corp. estimated that there are over 30,000 illegal connections in Iloilo, which means they only touched around 10 percent of the total number.

This, MIESCOR said, accounts for the 9.3 percent system loss of the city.

But aside from the system loss, illegal connections also known as “jumpers” have been a leading cause of fires in the area, as attested by Iloilo East Baluarte Barangay Chairperson Gary Patnubay, with More Power adding that fire authorities have recorded nearly 3,000 cases of electricity pole fires.

Patnubay said that even some wealthy residents in his barangay were hooked to illegal connections, although he claims that 75 percent of East Baluarte residents are now legally connected.

“I’ve been very hands-on in assisting my constituents in these processes and I can say that those who have been in the illegal connections are now moving to become legitimate consumers of electricity,” Patnubay said.

Due to this, More Power president Roel Castro pleaded to Iloilo residents to refrain from engaging in such activities, as they may be arrested and ordered to pay fines of up to P120,000.

More Power took over Peco’s operation last February, after a court ruling which allowed More to use Peco’s distribution assets to ensure the continuous provision of electricity in the bustling city.

Peco to reclaim the assets even if the Congressional franchise is already with More Power, but the same court dismissed the motion for reconsideration based on their lack of a franchise.[ac]