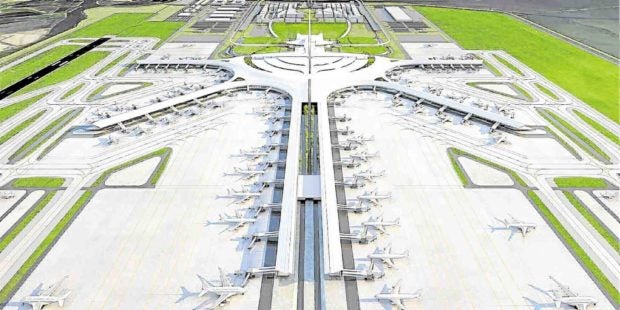 Amid a COVID-19 pandemic-induced recession putting pressure on the government’s meager resources, about 30 of the big-ticket infrastructure projects in the updated “Build, Build, Build” pipeline worth a combined P1.75 trillion will be rolled out by tycoons’ deep pockets.

Of the 104 infrastructure flagship projects worth P4.13 trillion in the revised Build, Build, Build list, the biggest in terms of project cost is the unsolicited public-private partnership (PPP) proposal of conglomerate San Miguel Corp. to build the P735.7-billion New Manila International Airport in Bulacan.

The latest Build, Build, Build list approved by the National Economic and Development Authority Board last Aug. 19 showed that the P26.6-billion Metro Cebu Expressway might be rolled out through PPP mode or could be funded by the national budget, while the P64.9-billion Manila Metro Line 1 Cavite Extension also known as LRT-1 Cavite Extension will either be financed via PPP or official development assistance.

Presidential adviser for flagship programs and projects Vivencio B. Dizon earlier told the Inquirer that the government plans to renegotiate the terms of PPP projects and possibly give them longer contracts to allow a recovery of private-sector investments in consideration of the economic “new normal” inflicted by the COVID-19 pandemic.

Lengthening PPP projects’ terms will facilitate investment recovery “as it will probably take a couple of years for demand to normalize” postpandemic, Dizon explained.

Another possible relief for private PPP proponents would be for the government to defer its share of revenues until the projects’ operations normalize, according to Dizon.

The Duterte administration had previously shunned PPPs as it did not want disadvantageous provisions such as government guarantees, subsidies and material adverse government action clauses.

Among Us But Its A Reality Show 3