Women can tip balance of power in Congress 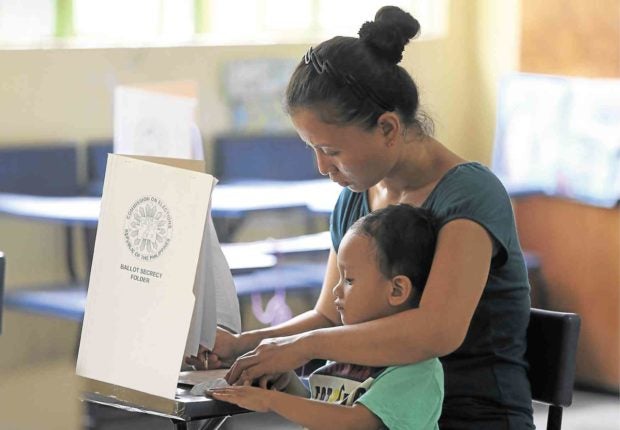 MANILA, Phiilippines — At more than 51 percent, women voters could tip the balance of power in Congress should they reject President Duterte’s favored candidates as a message that they have had enough of his sexism and misogyny.

But can and will Filipino women do it?

On Monday, 31.8 million women will cast their votes, or nearly 1.8 million voters more than men.

Political analyst Dennis Coronacion, however, said there was no proof yet that Filipino women vote on the basis of their gender.

Coronacion explained that this was because women in the country often vote not because of their interests as a woman, but rather on general interests, as well as on issues that would affect their families.

For this election, this meant economic concerns like employment, regularization and workers’ benefits, and issues on sovereignty, particularly in the West Philippine Sea.

Women politicians also appear to have recognized the absence of a unified women’s vote since they do not heavily play up the gender card, especially in crafting laws.

“They would propose bills that are advantageous to women, but they are doing that not because of the strong impact of the women’s vote but because it’s their advocacy,” said Coronacion, who also heads the University of Santo Tomas’ political science department.

That is why, Coronacion said, he does not see Mr. Duterte’s statements and actions toward women over the last three years to have a negative impact on his anointed ones.

Proof of that, he noted, is that Mr. Duterte still enjoys a high popularity rate among the population “despite his behavior.”

“It has not become an election issue and you can notice that in the debates,” he said.

The nongovernment organization and women’s right advocate Center for Women’s Resources (CWR) pointed out though that the apparent absence of a collective women’s vote was because Philippine society has remained highly patriarchal.

CWR senior research officer Edz dela Cruz said this was one of the reasons why it is crucial in this elections that women band up and reject candidates who just shrug off Mr. Duterte’s actions toward women.